We left Kathmandu early in the morning in the direction of Gorkha. This was not yet our final destination, but we decided to split up the journey and that was a good choice as it was a hell of a trip:

DAY 1
– First a 15’ bus ride from Lokendra’s place to Kathmandu bus station. Subash, Lokendra’s nephew, joined us in the trip (as the village that we were heading to is also his home village). In the bus station, it was already clear that he was a great help for us as we don’t speak, nor can read Nepali, nor can recognize the alphabet. We also had the feeling that we paid a more correct price for everything on our way, because we had a local with us.

– Second a 7 (!) hour bus ride to Gorkha, including 2 hours of traffic jam in the mountains. Miles & miles of trucks, busses, …in both directions, envived with a fresh smell of carbon monoxide, rasping & spitting Nepali, and oh yeah… it was hot… and sweaty! Reason for the traffic jam: we saw a big truck of Maersk slightly hanging over the edge & several trucks with engine trouble.
Did you know?
Nepalese drivers don’t know the difference between the inner & outer bend, they are surpassing anyway.
After such a ride, our 12 & 16-kilo bags were really weighting down on our shoulders during the 500 meter walk to the hotel. Now we understand why it is better to travel light

Gorkha does not have many budget hotels so we were pleased that there was 1 room left (which we shared with Subash), after first hearing that the hotel was full. This hotel was hit by the earthquake. Only 16 of the 32 rooms are currently accessible. Our room was basic, but the view on the mountains from the garden was incredible.

Did you know?
Subash does not call this mountains 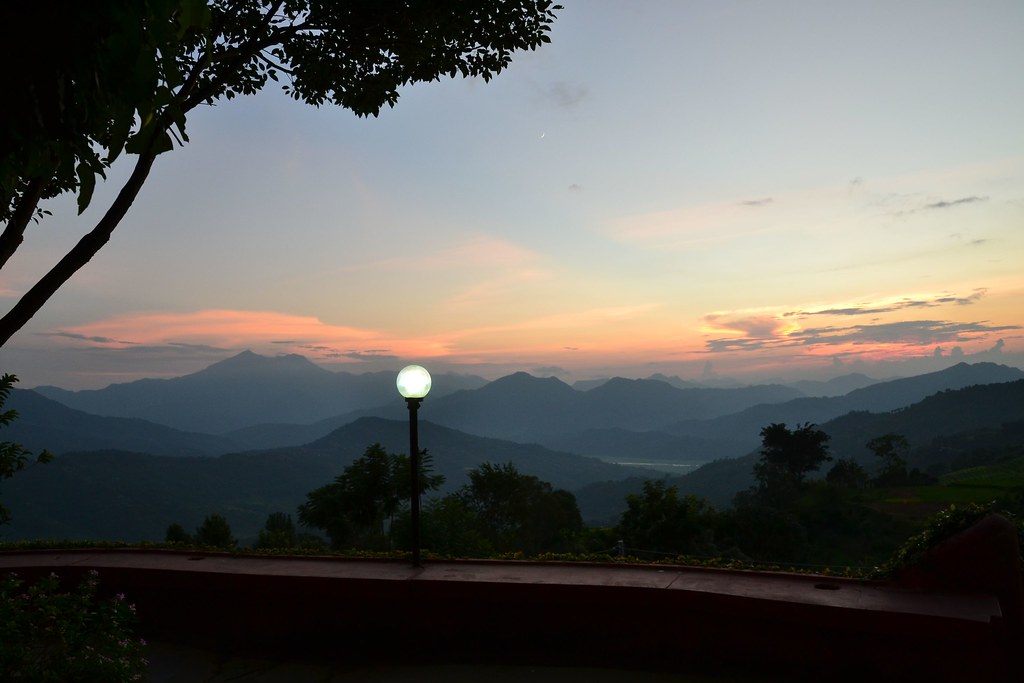 In Gorkha city, we bought some goods for the primary school that we were going to support. As Lokendra used his first raised money to support his own village & the school, he suggested to support the school of a neighbouring village. Also this school (like every house & school in this area) was completely ruined by the earthquake.
We bought:
• 150 copybooks
• 50 pencils
• 50 erasers
• 50 sharpeners
• 50 ball pens
• 5 red ball pens
• Scissors
• Glue stick
• 2 footballs + pump
• 4 badminton rackets + shuttlecocks
• 5 jumping ropes
• 50 packages of cookies 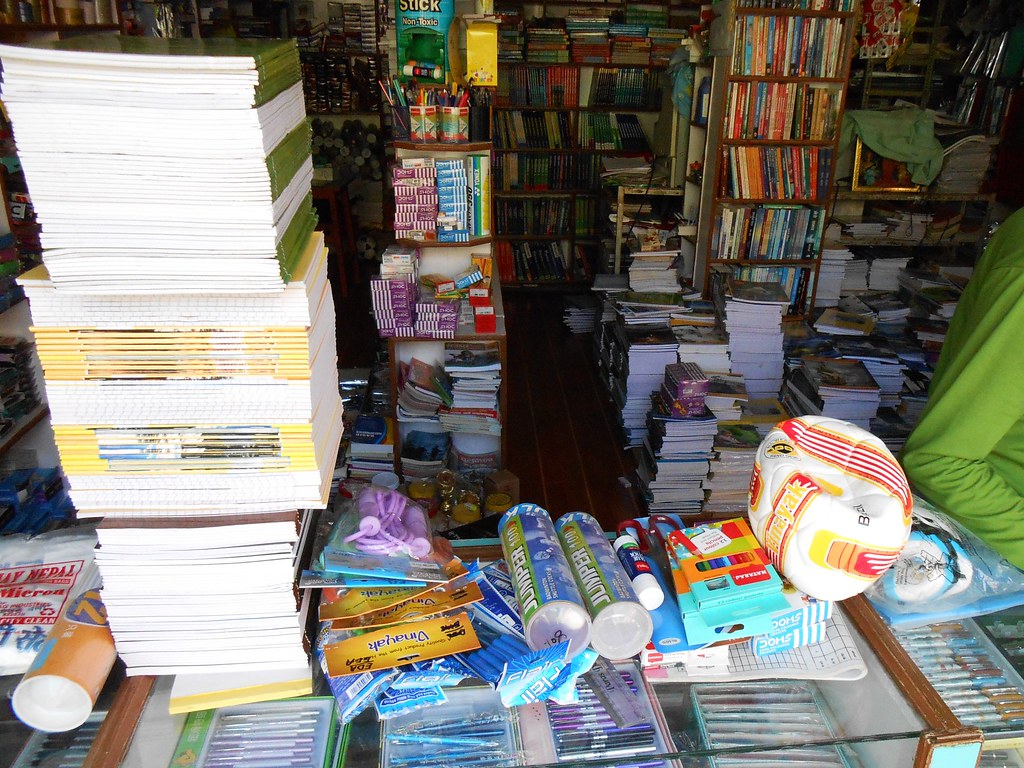 DAY 2
Subash got to the ticket office at 6am to buy us tickets for the 9am bus, but this bus was already full, so we needed to take the bus at 12am.

– Crazy 5 hour bus ride from Gorkha to … we don’t know, somewhere where the road ends in monsoon season. One thing we do know: In Belgium, the road would have ended miles before as the last part was like an off-road track. Céline was sitting on edge side what made her close her eyes several times. For Benjamin, it was most of all the lack of legroom that bothered him (& sweaty people sitting on his lap

). Because of course, it was hot again.

Did you know?
In Nepal they can stuff a ±40 seats bus with more than 100 people, 250 one day old chickens, a freshly painted bed, a half subconscious woman (electric shock or something), a drunk man (who was talking to us in a not understandable English while the rest of the bus was laughing), … Peeping & squeeling, and a flat tire but for the rest the Tata bus did fine! 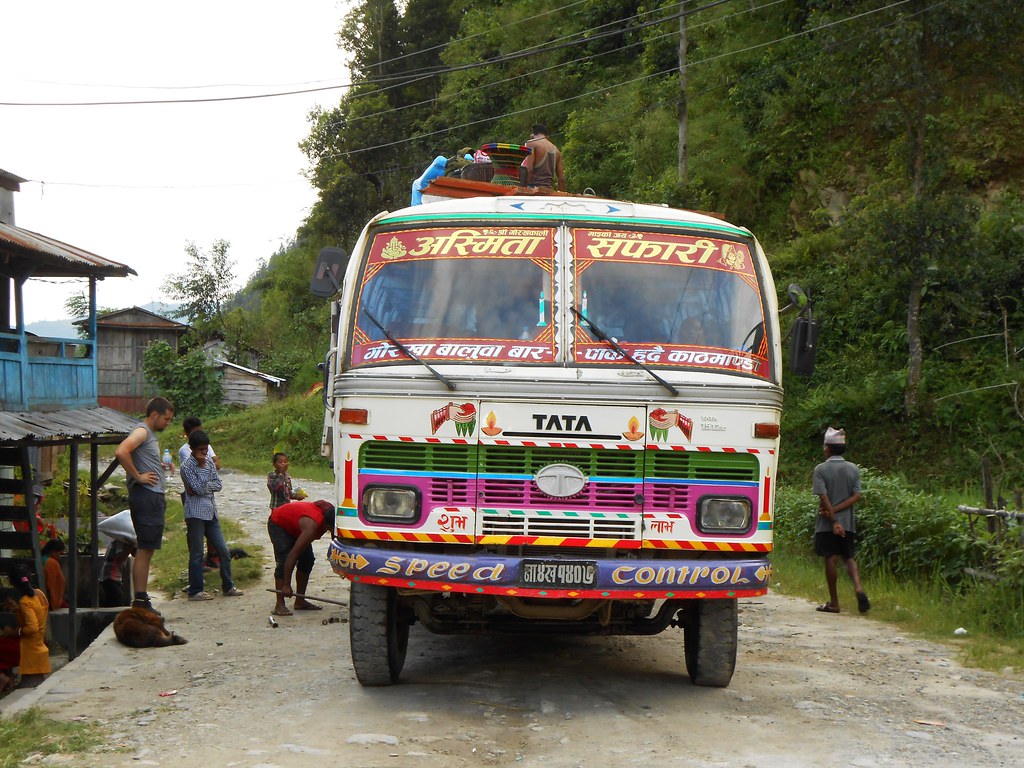 – So after (in total) more than 12 hours bus (over 180 km!!), the hardest part was yet to come: a 2 hour non-stop uphill hike to the village of Lokendra’s father (in the dark because at 6pm it gets dark here)! We have never sweat so much in our whole lives, but the good thing is that they said that we are good walkers (as some need 3 hours). The villagers however can do it in 1 hour.

We forgot all of this very quickly when we met Lokendra’s parents as they were so friendly & hospital. We got fresh lemon tea, homemade organic alcohol and a delicious meal. Lokendra’s father even sang us a Nepali song. We were sitting on some kind of low table under their porch, that they later transformed into our bed. Everything was so basic, but so good. We really felt happy, lying in our outside sleeping room! Best sleeping place so far!! And in the morning, we woke up with a magnificent view, straight from our bed.

Did you know?
The dog, who slept under our bed, liked to bark at 4 in the morning, for like half an hour. The morning after, they asked if we felt the earthquake. Apparently there was an earthquake of around 5 on Richter’s scale. We did not even notice 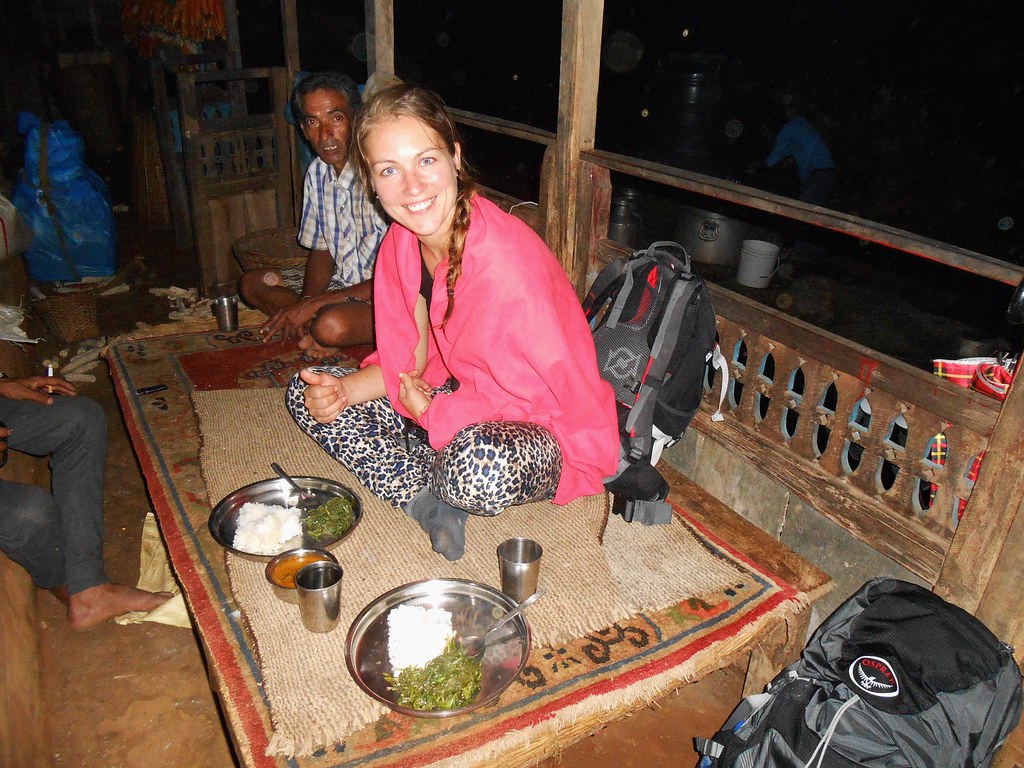 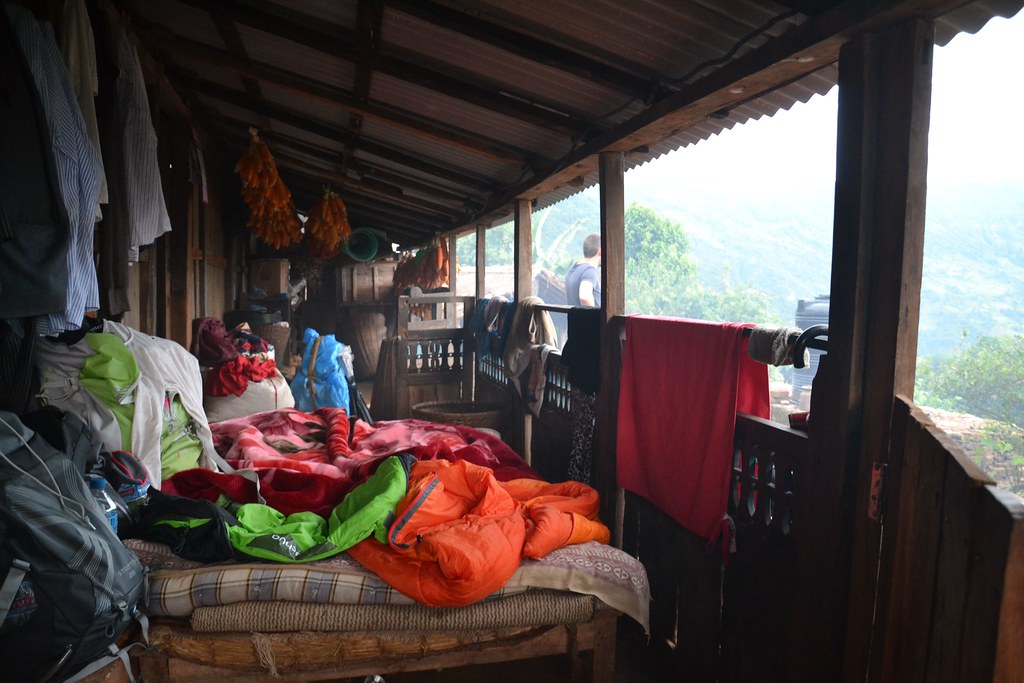 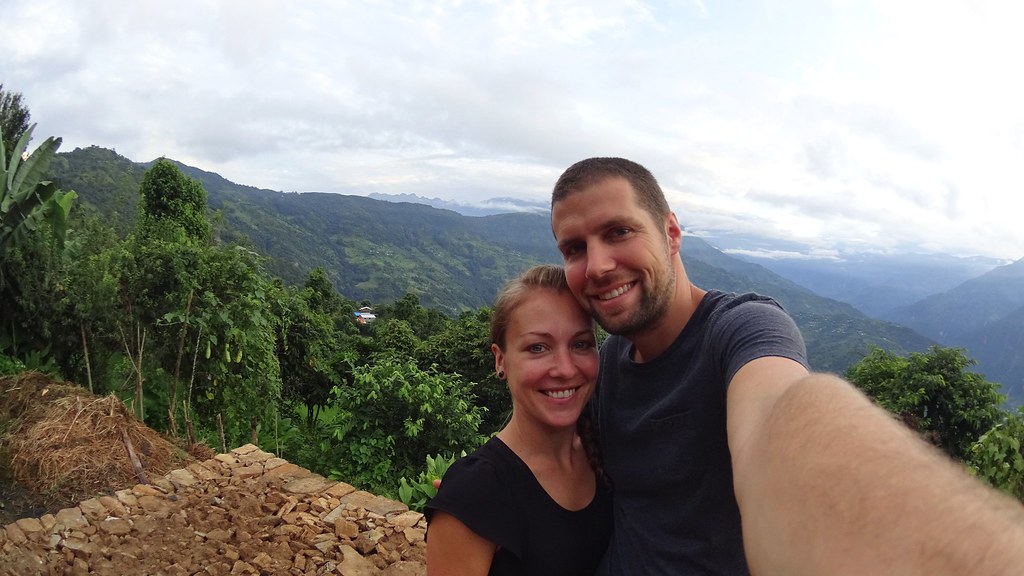 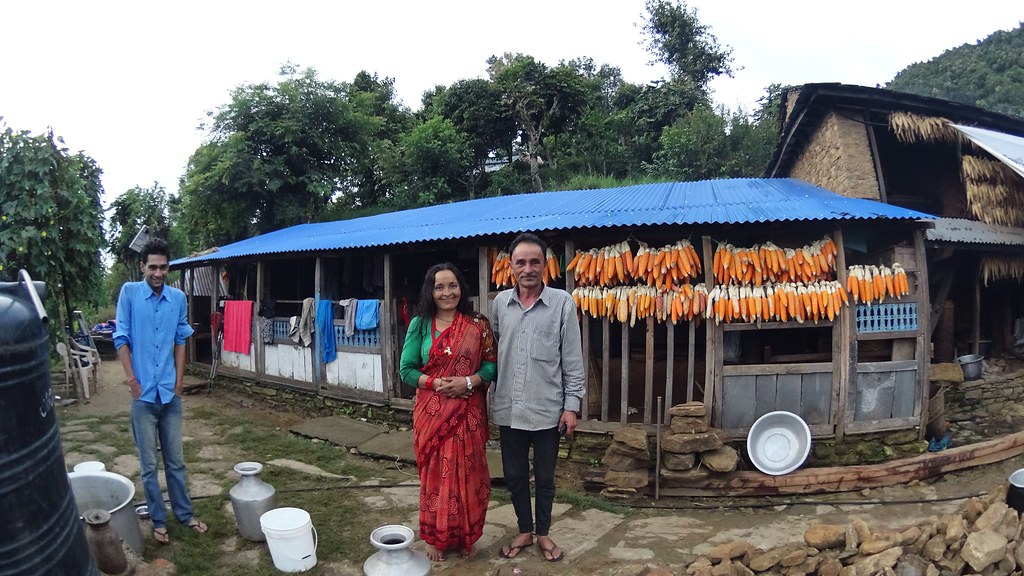 At 7 am, we left for our visit to the school, which was again a 2 hour hike away. But it was great as the views were amazing!

Did you know?
Leeches like us! We had many (mainly small ones) on and in our shoes & socks. We fought most of them, but still some managed to steal our blood (2 for Céline & 4 for Benjamin). 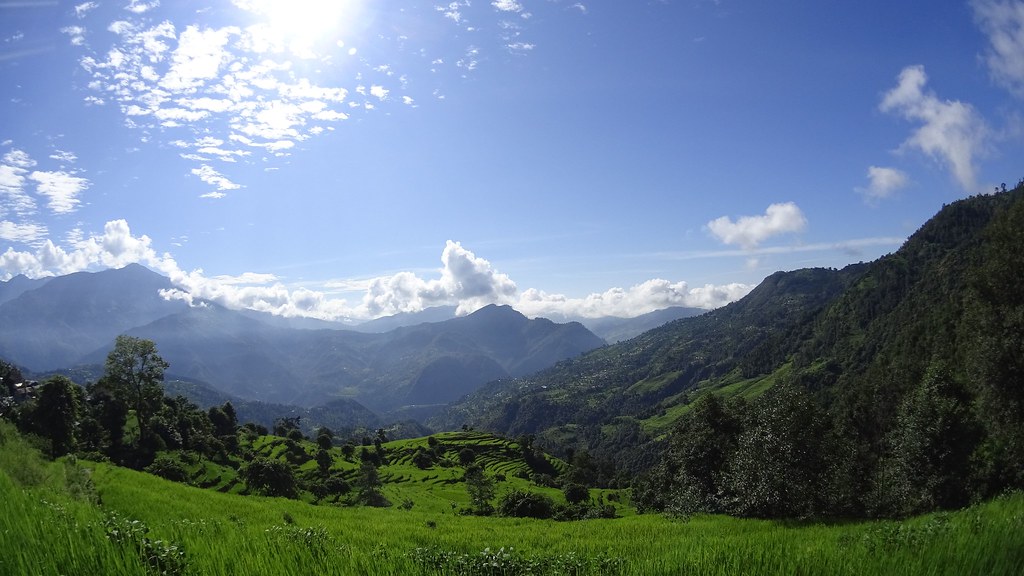 Our visit to the school didn’t pass unnoticed. Although it wasn’t a school day, most of the students, teachers & some parents came to the school. The temporary school is made with galvanized sheets in between 2 small villages (as the schools of both villages are gone after the earthquake).

The kids were so excited, peaking at the door of “the teacher’s office” where we were sitting. As they were pushing so hard to catch a glimpse of us, they even fell through the door entry

. There was also some kind of ceremony for us: the kids had to stand in formation (boys & girls separated) where we had to walk through & accept all the flowers that they gave to us. We had to sit at a table that was put outside (by the kids (!!) as we were not allowed to carry it because we were guests) and we received a flower necklace & a thika (red mark on our forehead, typical Hindu).

We showed all the goods that we brought & donated money to the vice-principal (as the principal is still recovering from a back fracture due to the earthquake) & teachers. We were advised to do this very openly, in front of all teachers, parents & students and to ask for a receipt as it is not good to give money to 1 single person (as everybody is in desperate need of money after the earthquake, and everybody wants to rebuild their home). Via Lokendra & his father, we will also be informed about what will be done with the money. With previous donations, they have flattened the ground so there is still a lot of work to do so the money that we have given is only a start.

Did you know?
The kids in the village are very happy with small things. They were happy with the cookies and the boys went crazy when we gave them the ball. We will never forget this moment! 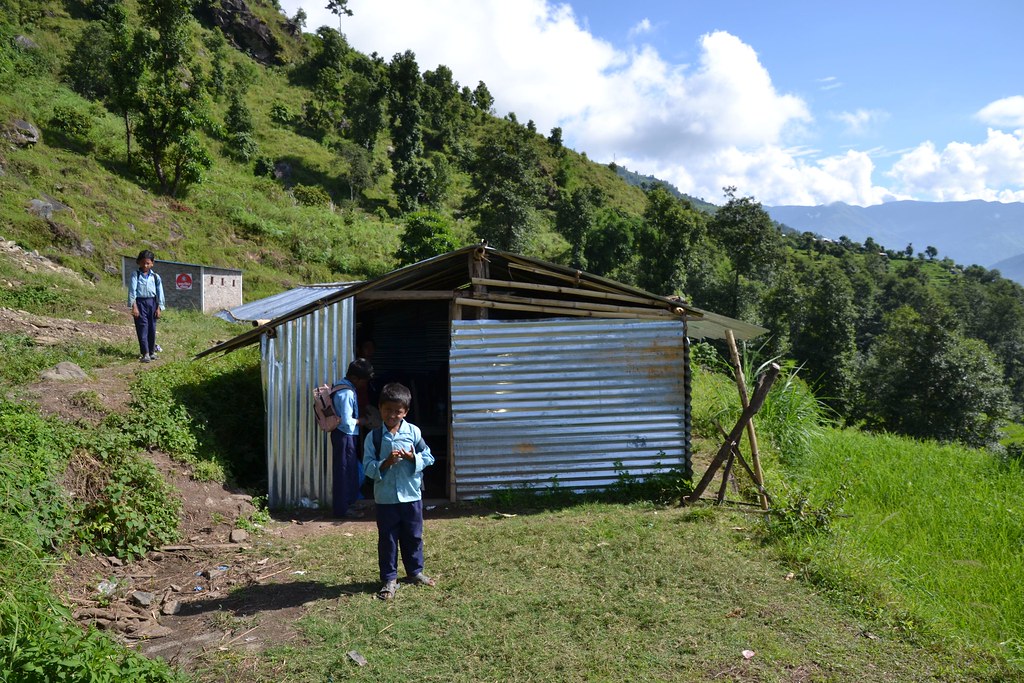 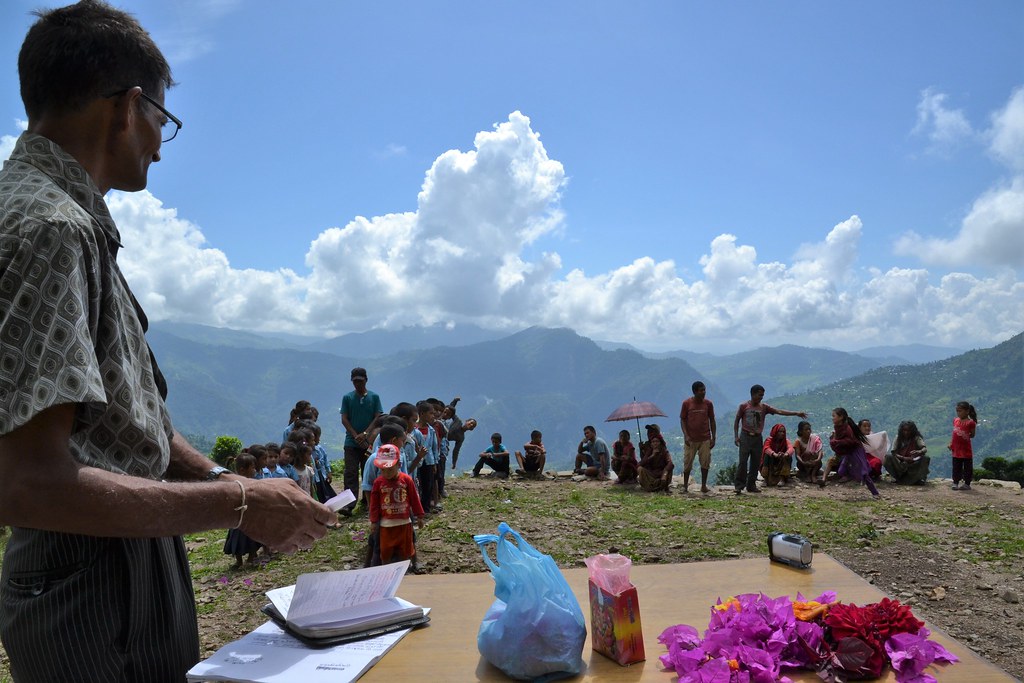 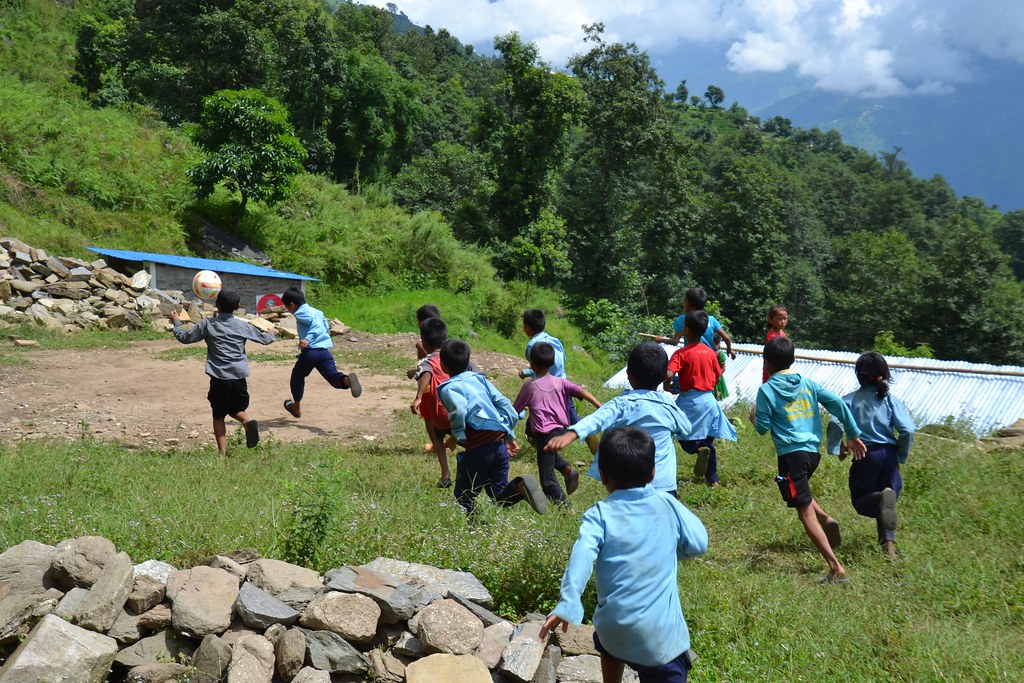 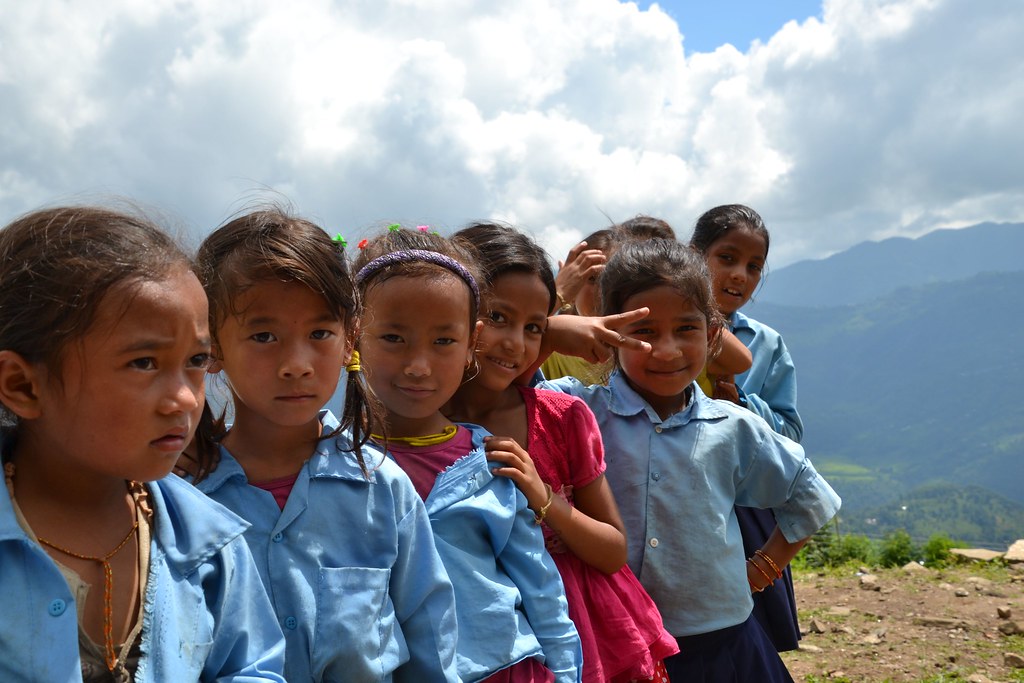 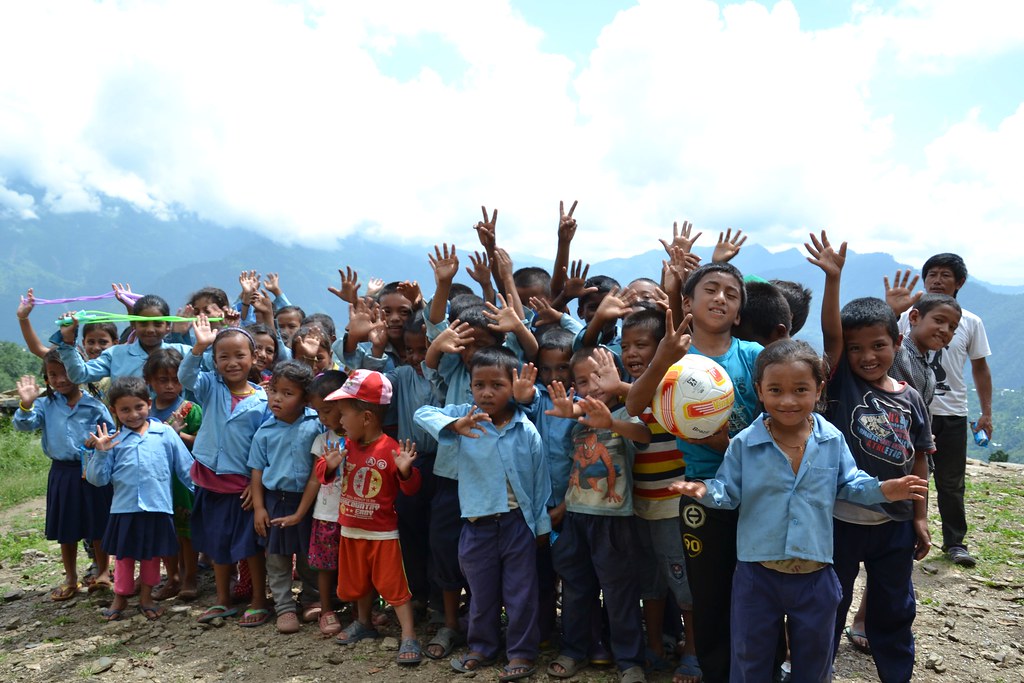 Afterwards, we were invited to have dinner at the house of a local family. Because we were guests, they insisted that we ate inside their home (while all the others sat outside). They also send someone to get us a beer.

), we really enjoyed the hospitality & friendliness of all the people we met.

Did you know?
People from the village only eat after we finish our plate & have enough.

In the afternoon, we had Subash as our private “guide” & explored the area. A lot of hiking, but it was worth it. We saw different small villages and their inhabitants, all busy working, rebuilding, … Saying “Namaste” really puts a smile on their faces and they are so optimistic, even if they have lost so much.
And the views, W.A.U.W, this area is sooooo beautiful! We experienced the countryside, without an organised trekking tour, but with the help of Subash who turned into a friend.

Did you know?
The offroad track that we talked about earlier continues even further and connects all the small villages. In monsoon season however, this part is not accessible by bus as EVERY monsoon the roads are destroyed because of the rain, landslides, … And EVERY year, after monsoon, they fix the road again. 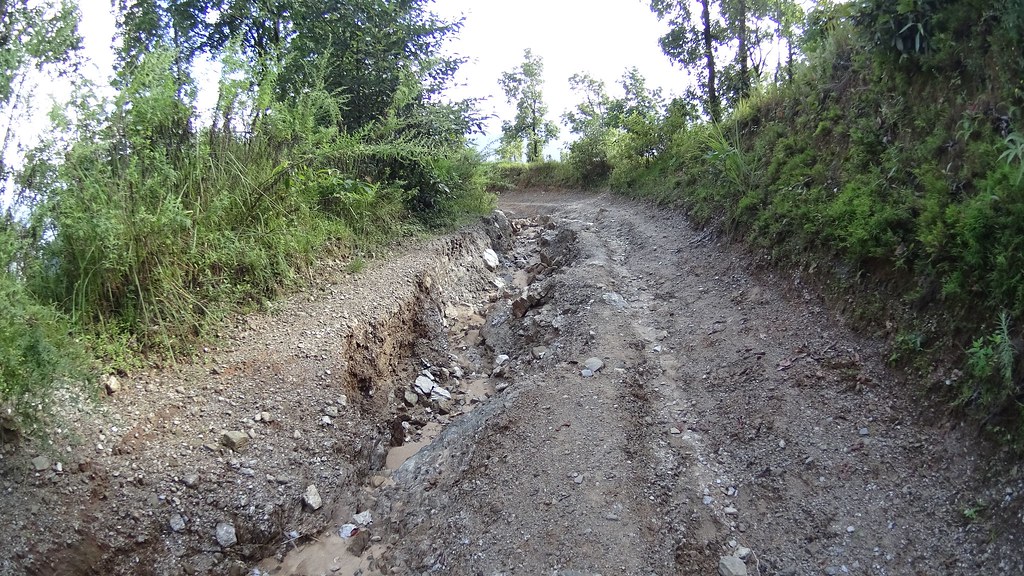 When we returned at Lokendra’s fathers house, we catched a glimpse of our first (fingers crossed!) 8000-er mountain: the Manaslu. Again WAUW!
We had a wonderful evening and a delicious meal. Uma (Lokendra’s fathers wife) is a great cook and everything is made with ingredients that they cultivated themselves. 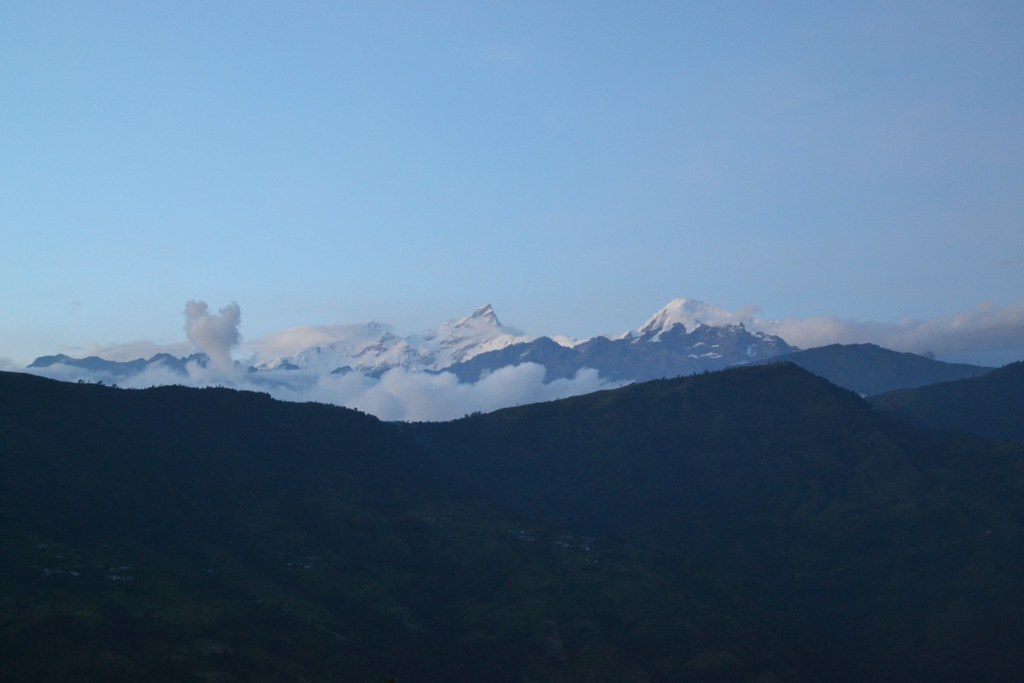 DAY 3
Unfortunately, we were not able to stay any longer as they were afraid that we would be stuck because of strikes (due to political decisions). This meant that we got up at 4.30 in the morning to hike all the way down to the “end of the road” where the bus starts its way back to Gorkha.

Did you know?
Porters are very strong! A 72 year old man carried both our big bagpacks the steep hill down on slippers and we could not keep up, even if we had strong hiking boots & only day packs. We asked for 2 porters, but they said 1 is enough… (For your info: Portering is a relatively well paid job & Lokendra’s father asked a very poor man to do this so we did him a “favour”) 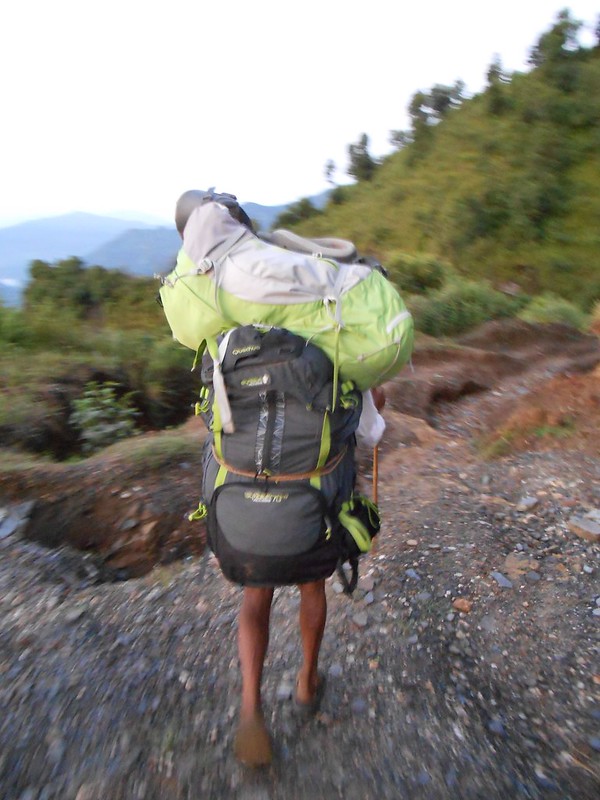 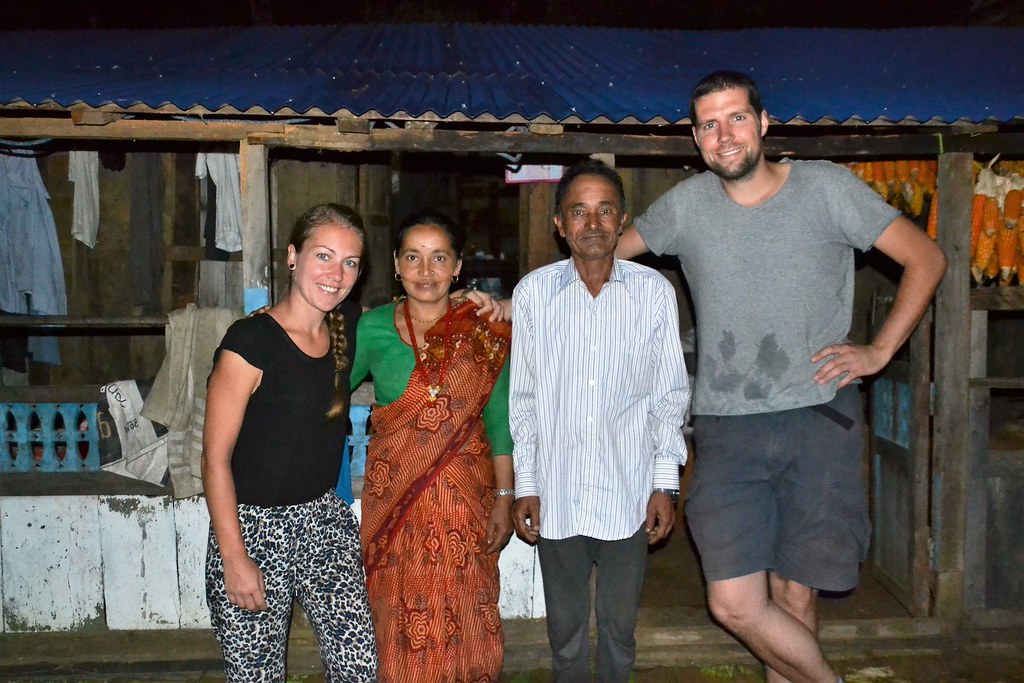 Did you know?
Benjamin is a giant in the land of the small Nepali people. Céline fits right in

And so we continued our journey, all the way back… However it went easier: the bus was far less crowded and we were sitting hillside so the bus ride seemed less scary this time

Conclusion: Hard to get there but it was a ONCE IN A LIFETIME EXPERIENCE! We would recommend it to everybody heading to Nepal in the near future: the people need it as the government does not give any support and the memories you take back home are forever!!

THANKS FOR ALL THE DONATIONS, your money was well spent!

4 thoughts on “A day on the countryside: helping a school in Muchchok”