During the trip through the Cardamom mountains and its jungle (see previous post), Suzy – our beloved motorbike – got some tough beating and was making again much more noise. We made it to Battambang and wanted to reach Siem Reap, but we definitely needed a mechanic fast. The first warning she gave us was to break her chain when we left Battambang. It was clearly her way of telling us “don’t go any further, fix me here. I’m in so much pain!”. But we didn’t listen, just fixed the chain and went to Siem Reap. We were going to stay there for some days, so it was the perfect place to have her noisy problem fixed. 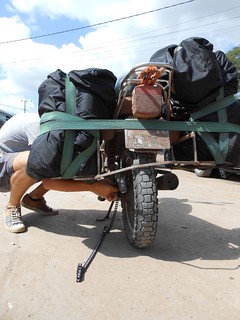 Too bad for us we arrived in Siem Reap on the first day of the water festival.
Which means … no mechanics at work (or sober enough) to fix our Suzy. 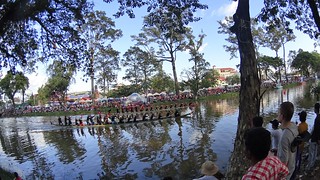 Did you know?
Each year Cambodia celebrates the Water Festival (Bon Om Touk). This 3-day festival is to celebrate the end of the rainy season and the reversal of the tide on the Tonle Sap river. This festival is typically celebrated by gathering at the rivers, eating, drinking, supersoaker-fights and above all: boat races, boat races and more boat races. Not the V8 supercharged types of boats, but rowing boats who engage in a head to head rowing race with about 20 people in each boat. And there are hundreds of these teams competing one another.

So we tried to visit the temples the next day with our dying steel horse, which we by then had to push each time to get it started. RIP battery. That day we visited a part of the big loop at the enormous temple complex: Srah Srang, Banteay Kdei, Ta Som, Preah Khan, … At least that part Suzy survived, but by the looks we got from the locals every time we started the engine, everybody was thinking the same: “Your bike won’t last long. You need Tuk Tuk?”.
In the afternoon we wanted to go to Ta Prohm (The Tomb Raider temple), but Suzy gave her last puff and that was it. RIP Suzy. Pushing, using sweet words, even a heart massage, nothing helped to get her rattling again. So we finally gave in and took a Tuk Tuk to complete the temple visits for that day. 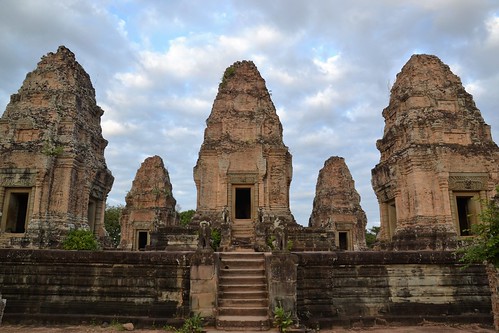 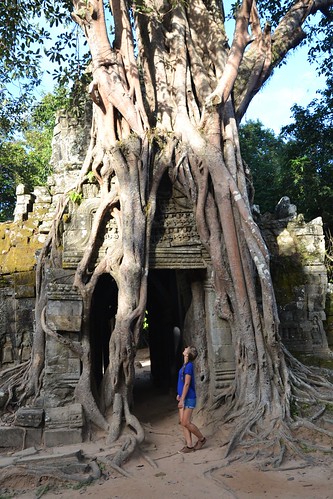 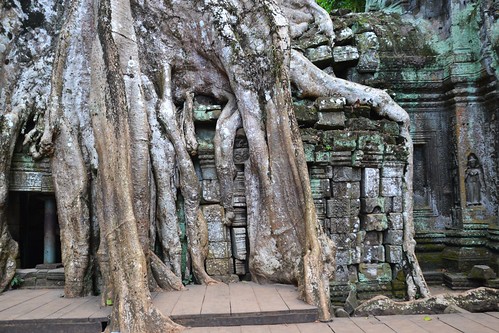 We have spent the next days at the water festival (read: killed some time at our hotel reading, skyping, photo selecting and blogging and when we felt hungry passed the crowds at the river to find a restaurant. After a boat race or two you get the picture of what it’s about, which makes it very hard to imagine they can enjoy this for 3 days!). And when the water festival was finished, we took her to the 1st ‘mechanic’ – actually an NGO where they teach kids some mechanics. To tell the story short, they looked at it for a day, couldn’t fix it, it was Friday and they don’t work in the weekend (“because we are NGO, not a real shop”), took it to another mechanic, who worked on it for 2 days. In the meantime we took another Tuk Tuk for day 2 of visiting temples: Banteay Srei & The Angkor Thom complex with Elephant Terrace and Bayon as the main eye catchers. 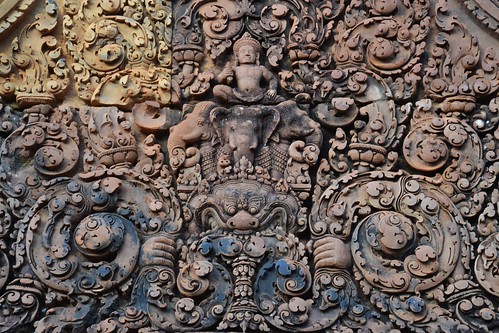 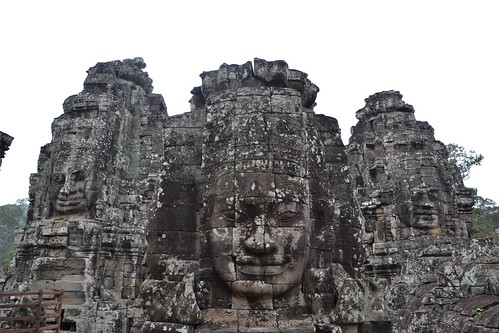 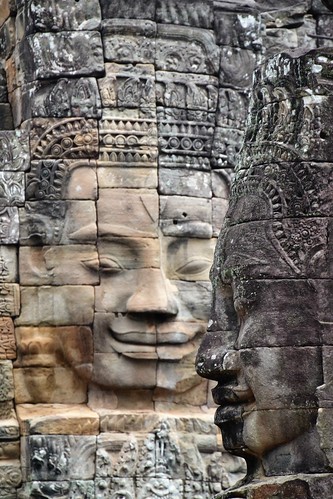 Result of the 2nd mechanic: they fixed it! By putting a totally ‘new’ (read: 2nd hand but shinier than the one we had) engine in. Suzy was again purring of joy! 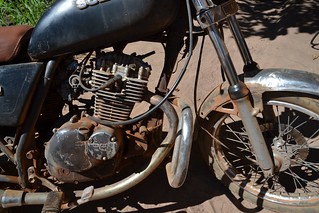 To really test her out we took her to the sunrise at Angkor Wat the next morning. Quite the experience: We got up at 4 AM, left our hotel at 4.45 AM and we were late! Not as “the sun was already up when we arrived”-late, but “not early enough to beat the crowds”-late. If you look at the below pictures, you’ll get the point. If you google a place and you find thousands of pictures, you’ll know you won’t be the only one there when you visit that place. It was nice to see, but the bus-loads of people take away a bit of the magic. 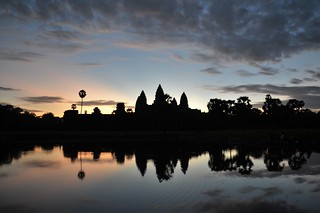 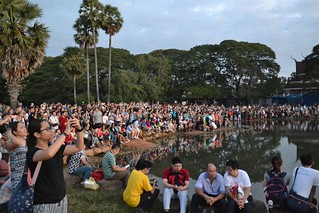 After Siem Reap, time was running out on our Visa. We had only 7 more days to get to Laos, but we first had to get the rest of our luggage in Phnom Penh and then drive north again to the Cambodia-Laos border. And with our problem-magnet of a bike, we might need to calculate some extra time for this trip.

And luckily we did. On the trip from Siem Reap to Phnom Penh, which has some amazingly bad roads by the way, we heard a new sound. Not from the engine this time, but from the rear wheel. It seemed that the bumps and potholes we encountered in Cambodia were a bit too much for her and about half of the spokes were broken. Not being able to drive any further and having passed 5! mechanics who couldn’t fix it (or didn’t want that day because there was a party in the town), we literally hanged the bike to the back of a small local van and drove to Phnom Penh. In Phnom Penh an inventive TukTuk driver took it to a mechanic. When it comes down to making some money, the TukTuk drivers put anything in/on their cart! And the best thing was, the first mechanic we asked could fix it! Result: the second shiny part on our bike! Who knows by the time we sell it, it might be a fully chromed out, pimped out motorbike… but let’s hope not. 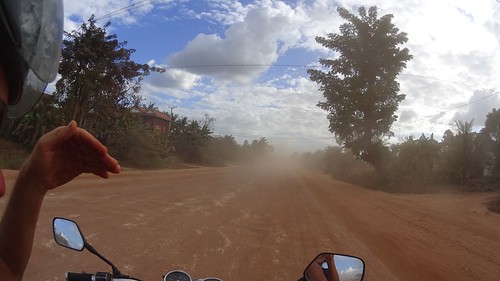 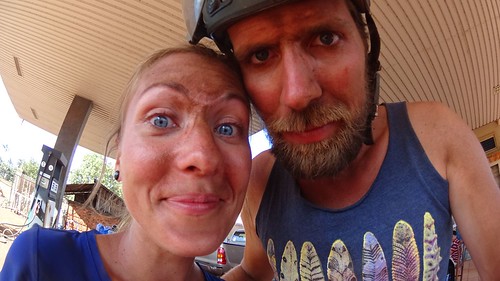 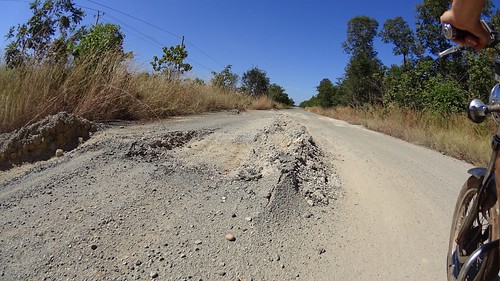 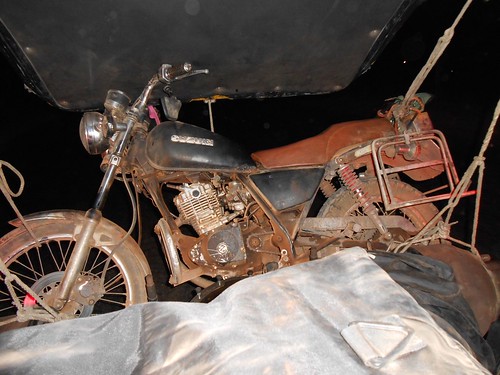 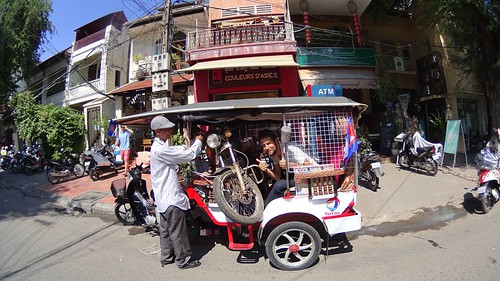 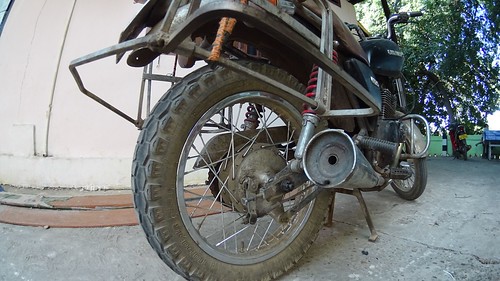 We stayed two nights in Phnom Penh, made dinner (asperges à la flamande!) on the last evening for our hosts & friends from the Chocolate Shop, Lieven & Griet + Photographer Anna Bella who joined us, and the next morning we went off to Laos! After a night in Kratie & Stung Treng, nice roads through the Cambodian country side, very few traffic, a “problem-less” bike, a last nice sunset on the Mekong and a crazy border crossing we entered country number 5: LAOS! 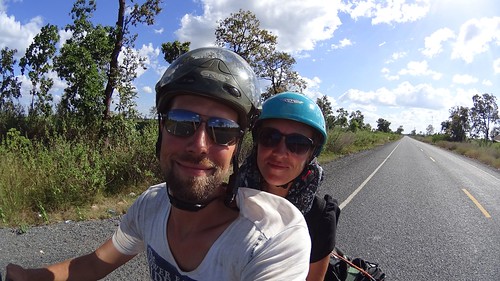 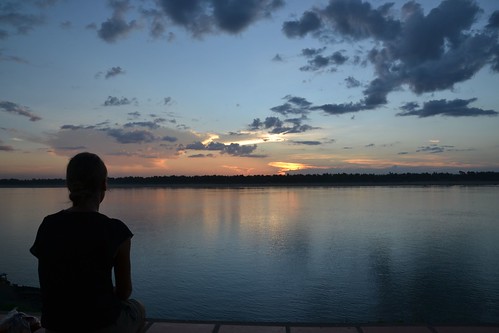 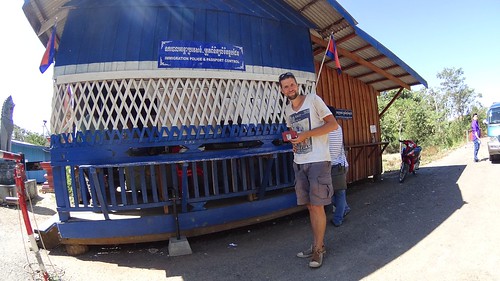 One thought on “On and off-road … with Suzy”