Myanmar…
A destination that is getting more and more on peoples radar to visit and we should visit as soon as possible before it gets too overcrowded. That’s why we squeezed it in our trip. Even if this meant eliminating Australia from our world trip countries list (except for a couple of days in Sydney).

Now what had we heard about this country before?
Many temples and friendly people. That’s about it. Oh yeah, and many call it still Burma.

Our first week in Myanmar we visited Yangon with Christmas, did a trekking around Kalaw, boat toured Inle Lake and celebrated New Year’s Eve at Nyaung Shwe. Enough stuff to write about!

Arriving in Yangon went smoothly to say the least. It was the first Asian country where the border control was friendly & fast and the taxi drivers helpful and less pushy. Céline was a bit tired (1 night bus, 1 bordercrossing bus, 2 tuktuks, 1 taxi, 2 flights & 1 night in the airport may be the reason, but we are not entirely sure

) so after catching up some sleep upon our arrival, it was time to explore the city. Arriving in a new country always gets some adrenaline flowing. A positive vibe to start with!

Yangon
The biggest city in Myanmar with about half the population of Belgium living (6M) offers a huge variety of culture, religion and authenticity to satisfy everybody’s needs. It has been an British Colony which is visible in the colonial architecture throughout the city and gives the feeling of a “once thriving, but now forgotten” place. 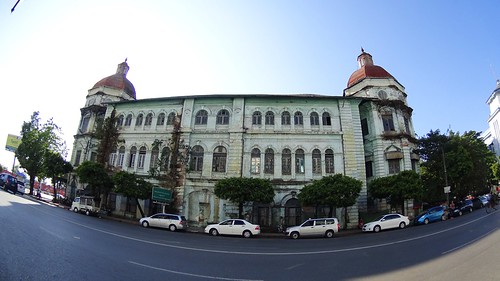 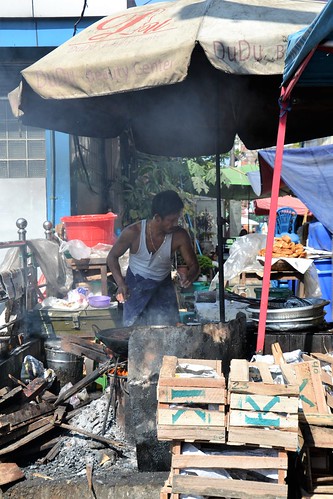 There were immediately some things that caught our attention:

During the next few days, we found these answers that learnt us more about the Burmese culture:

“Templophiles” (there is probably a real word for it) – people who are into temples – will have a blast in Myanmar. Especially if they are also Chrysophiles. They won’t keep themselves dry here. We are not particularly into temples, but the Shwedagon Pagoda at Yangon is probably one of the most astonishing religious places in the world with enough gold to make Fort Knox jealous.

Did you know?
The Shwedagon Pagoda is 99m high and is basically a brick structure covered with gold plates! Its umbrella crown (nearly every in good shape pagoda has some kid of chandelier at the top) contains 2317 rubies and 5448 diamonds with at the very top a diamond of 76 carat. One wonders why everyday people still offer food and flowers to Buddha when he can clearly buy all that himself! 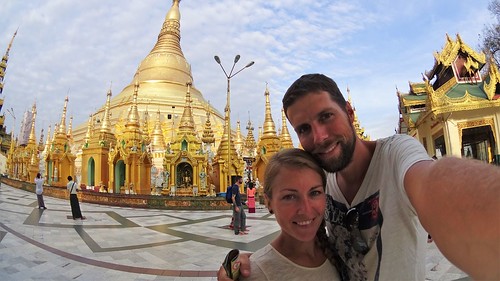 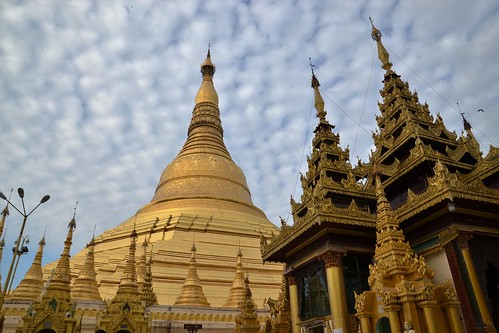 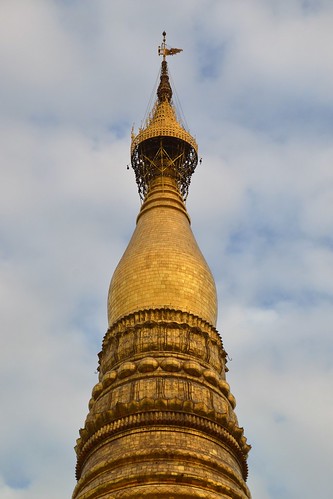 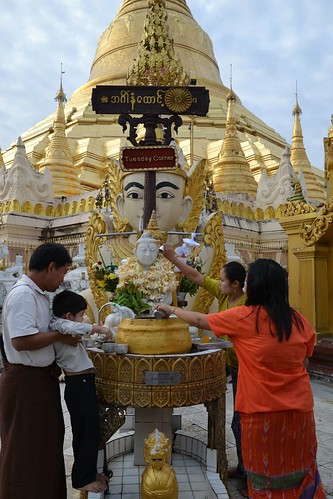 To experience the more daily life we took the circular train around Yangon which is slow, bumpy, has no doors nor windows, hard seats, but we loved it. A 3-hour train ride costs costs less than 20 cents and is a nice way to see numerous farmers transporting their goods from the field to markets in the city. It is not that popular, so people genuinely want to make a conversation to either get to know you or practice their English. If there is one thing the Burmese know about Belgium, is that they have a good football team! They love football here. Way to go Red Devils! It’s a much better association than with the terror-link these days. 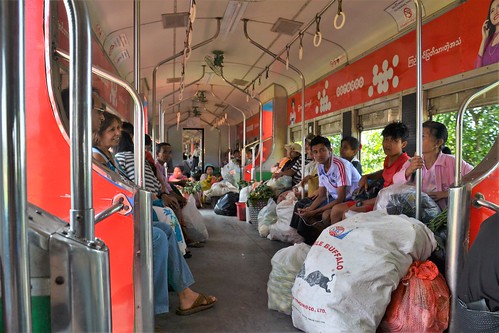 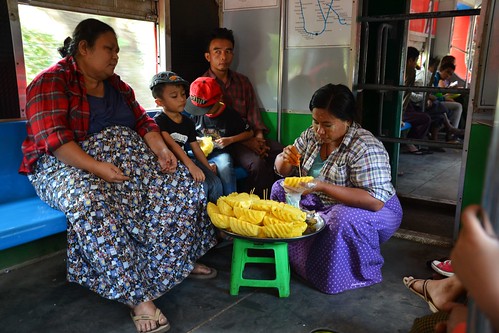 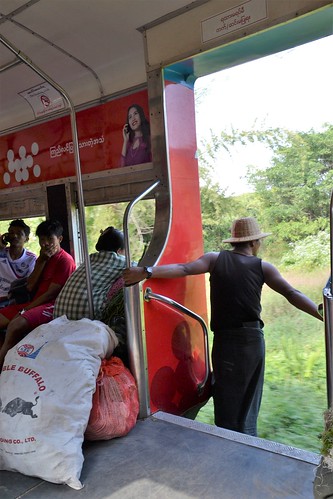 What about Christmas in Myanmar?
This can be short: There is no Christmas. So the 25th we went to a more touristy, expat restaurant to have a nice meal. The waiters had Christmas hats and Christmas music was playing all night. But hey, we would have taken anything which remotely reminded us so that was fine.

Kalaw and Inle Lake
We arrived in Kalaw after a memorable night bus.
In a positive way: The business seats, the refreshing towel and toothbrush, the on-board drink and cakes… That was a nice surprise. There was even an electricity plug for every passenger.
In a negative way: When the bus dropped us of in the middle of the night at the side of the road (it was 3AM instead of 5AM like they said!). We spent the night/morning from 3 to 7AM in a cold semi-outside 24/7 place with bad food and drinks. Really weird that this place was packed with local men, just hanging around, watching television, not speaking to each other, … Did we say it was in the middle of the night?? 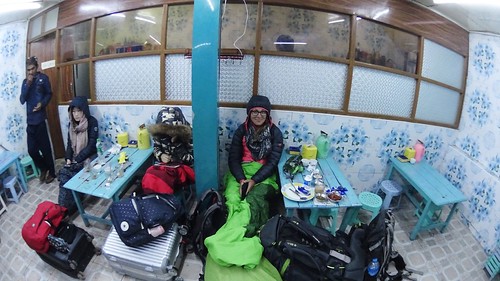 After such a night we were TOTALLY ready to start our 3day trek at 8AM in the morning. We managed to find a guide just in time & joined 5 other people. We soon forgot how tired we were when walking along the beautiful countryside. Although it is a popular walk (and we are at high season), the hike was way better & remote than we expected. We took small unpaved paths, through the fields, following railways, … We saw farmers working the fields using oxcarts & buffalo ploughs, children picking chilies, ladies carrying loads on their head, … A world so far from ours, where at sometimes we even felt a bit like an intruder, someone from outside looking in on them. But the many smiles along the way & hospital homestays still made us feel welcome and we enjoyed every second. The views along the way were extremely beautiful and can unfortunately not be put into words, even not perfectly captured in a picture, but still we took a try 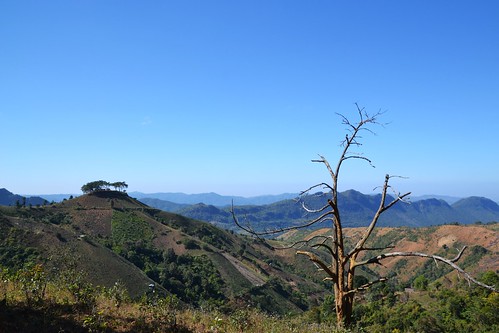 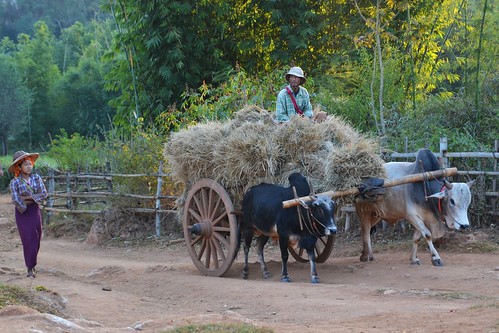 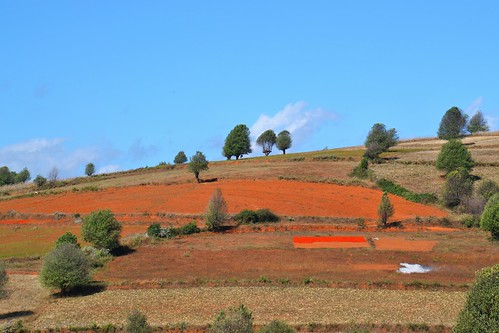 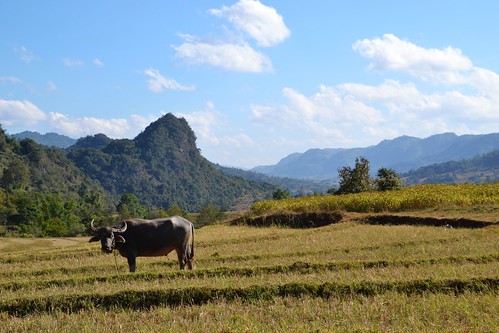 During the hike, the delicious home-cooked meals and the beers at night we learned to know better Hanneke & Steven (a Dutch couple living in Amsterdam), Raoul & Nathalie (a couple of friends living in Geneva & Paris, with roots across the ocean, in respectively Canada & the States) and Stephana (a Parisienne). As we were all going to be in the little town of Nyaungshwe at Inlé lake for New Year’s Eve, we decided to celebrate together. 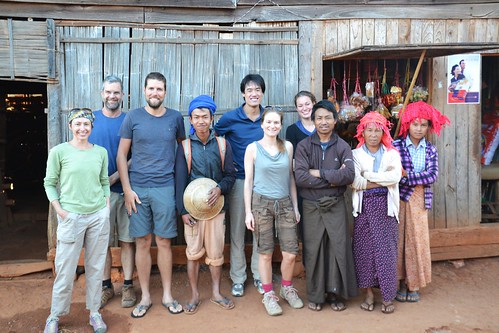 On day 3, we closed the hike with an amazing boat ride through small canals with stilt houses before crossing Inlé lake. 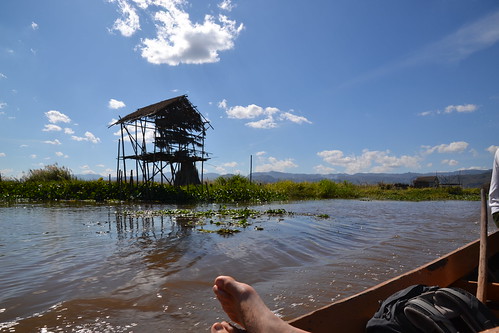 Did you know?
Inle lake is the second largest but highest lake of Myanmar. It’s surrounded by a couple of stilt house villages inhabited by farmers & fishermen. The former grow their crops on floating gardens, the latter have a specific way of rowing using their feet.

Nyaungshwe is a very touristic town, full of little restaurants and we spend the last 2 days of 2015 on and around Inlé lake.

On day 1 we left early in the morning (thanks to the helpful tips of our Canadian friends Dean & Laynni who we met during the Everest trekking) with a boat – crossing Inlé lake again and seeing fishermen along the way- to visit the 1045(!) pagodas at Indein before the crowds started rolling in. Mission accomplished, and spectacular it was! We enjoyed the rest of the day boating through small canals and seeing the daily life in this “Venice on the countryside”.

On day 2 we bicycled around the lake, but we must admit that the views during the hike and boat rides could not be beaten. However, not to sound too spoiled, we must also admit that with a wine tasting in the late afternoon there are worse ways to close down 2015! 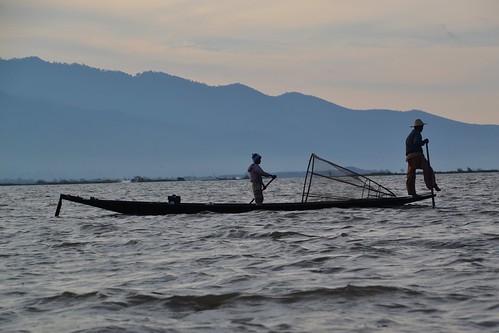 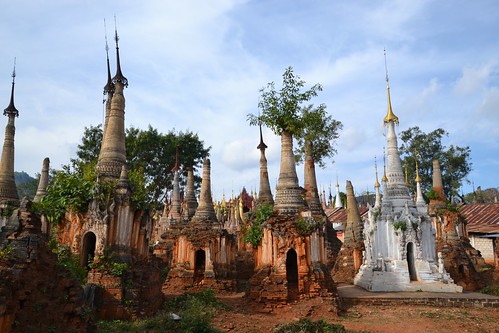 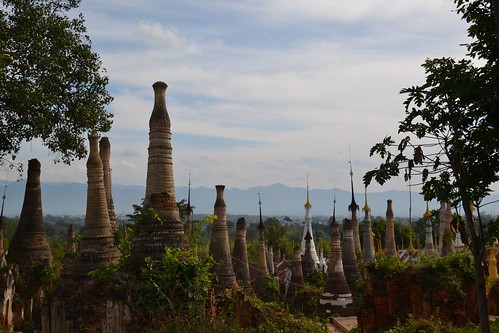 What about New Year in Myanmar?
This IS celebrated! But a few months later… With water, and no fireworks… But in the company of our trekking friends we still managed to have an enjoyable evening that lasted longer than 12 o’clock (which is already quite spectacular as everything normally closes down at 11pm in Myanmar). We even had a countdown and 1 minute of fireworks! But as soon as that was finished, people all started to get back to their hotels, probably because there wasn’t much to do and many of them needed to catch a bus the morning after to take them to their next destination.
And so did we, the 1st of January we took the night bus to Bagan. More about the mesmerizing temple views we got there in our next blog post! If we ever have reliable WiFi* again in Myanmar 😉

To end with, we want to wish all our readers the best for 2016 and we hope that we can continue to give you the “holiday feeling at home” with our stories.
Lots of love,

*: It took us several nervous breakdowns to upload this post.