Our last moments in Asia: time to say goodbye, reminisce about the good times we had and update you on our latest adventures in Myanmar.

After Inle lake we went to Bagan, which we absolutely loved. We rented an ebike (electronic scooter) and cruised around the fields, between the numerous temples. Away from the most popular temples, it is a really peaceful area where you can enjoy the most amazing sunrises & sunsets (but again: as long as you find a quiet spot, otherwise it is horrible

) and let the child in you search for narrow stairways in order to reach the upper levels of the temples. The rest of the time we were busy posing for Asian tourists wanting a picture with us

. Below a little movie to give you a better Bagan impression:

From Bagan we travelled in the direction of Mandalay, with a stop in Monywa, just to see one of the biggest Buddha statues in the world, and OH MY GOD it is big! The standing buddha is 116m high, the one lying down is 92m long (look for Céline in the picture). Impressive to see, but also so unreal, in a country where there still is so much poverty, that so much money is spent on religion… 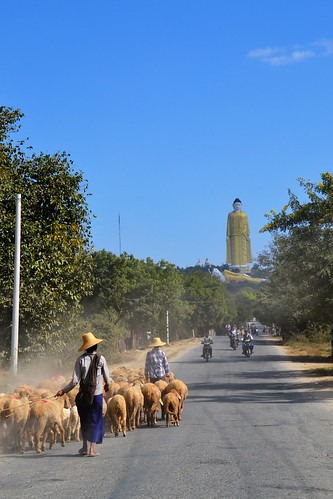 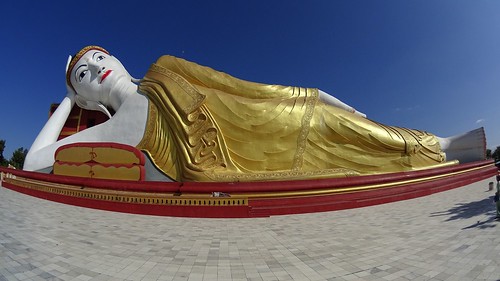 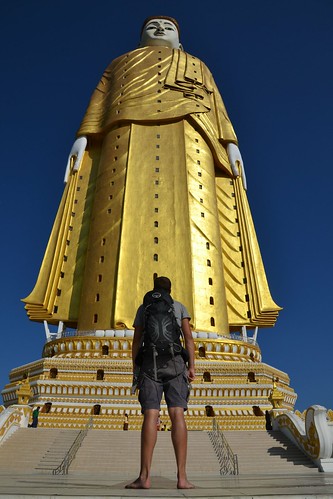 We didn’t take the time to explore Mandalay properly, as we wanted enough time to do another trekking (and because many other travellers told us the city is not really worth it) so we continued our way in the direction of Pyin Oo Liw. A little town with nothing to do (unless you are keen on botanical gardens and want to spent 6$ entrance fee) but it was the starting point of our 8 hour slow train journey to Hsipaw. Slow… and extremely bumpy! At times your whole body got shaken, like a polaroid picture. We will never again understand how trains are able to derail in Belgium

The whole point of this train journey however is not torturing your body, but the part where you cross the Gotheik viaduct, an immense steal construction built in the early 1900s and was back then the second largest railway bridge in the world. Luckily it received some minor maintenance a couple of years ago, but it still squealed and creaks when the train makes it way over it. 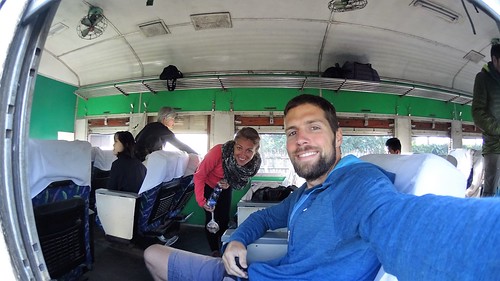 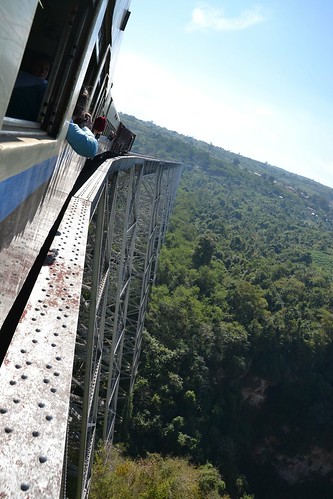 But what impressed us even more than this bridge was that we bumped into Mathieu “die-van-de-bootjes” Carmois, a guy from the same hometown of Céline. Quite a coincidence, being thousands of kilometres away from home and sharing the same train with someone you know from home. To make it even more memorable, we decided to also share 3 days of trekking.

And memorable it was! Three days of hiking (we took the hard option, and although it ended up as the medium option because of army fighting, it still felt very hard going up and down… and up again… and down again…), beautiful mountain slopes, remote villages, but most memorable of all were all the people we met along the way. As this region is not (yet) so touristy and the villages were we stayed only see foreigners 2-3 times/month, the villagers were really happy to see us. They shrieked with laughter when seeing themselves on the little screens of our cameras. The children have very little but group together and play with everything they can find.

Lodging was very basic: a thin mattress on the ground and no running water, but the meals that the families prepared for us were delicious. We also made a new friend, Bobby, a stray dog that followed us for 2 days and even joined us in the tuktuk for the last part of the trek.

Did you know?
Myanmar is ethnical diverse: over 130 ethnic groups are recognized, having nearly as much armies to protect themselves. We did the trekking in the Shan state -having about 10 different Shan armies- and visited Palau villages -having also their own Palau army. At this time, there are some struggles between them (induced by the government army!?) which made it not safe for us to cross their battlefield in the mountains. Note: at the village were we slept about 300 Shan soldiers were stationed, but the only shooting we saw were our selfies with the soldiers. So we didn’t really feel unsafe 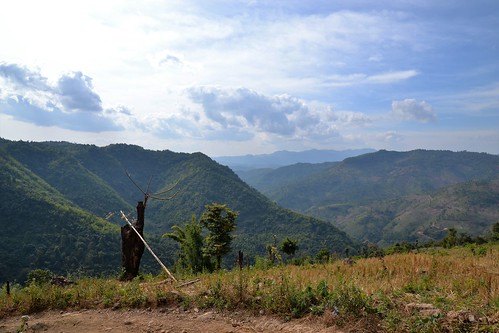 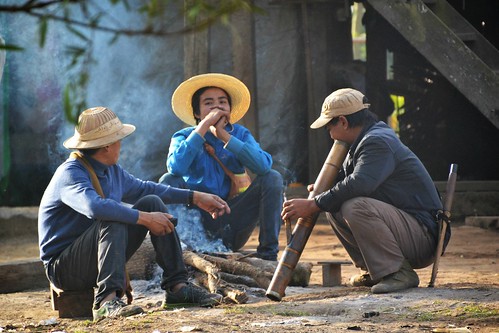 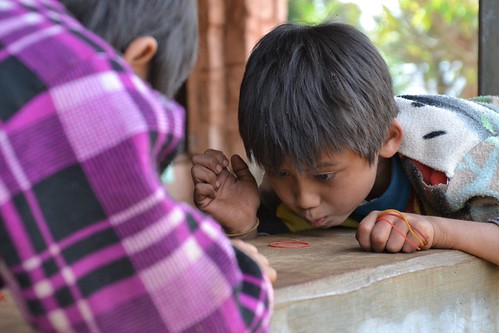 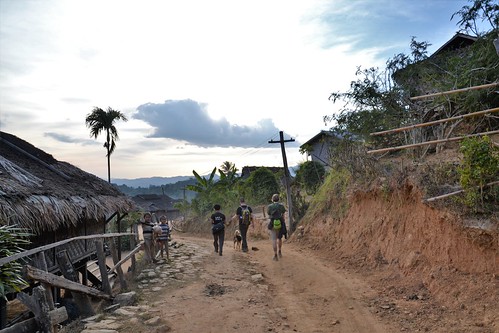 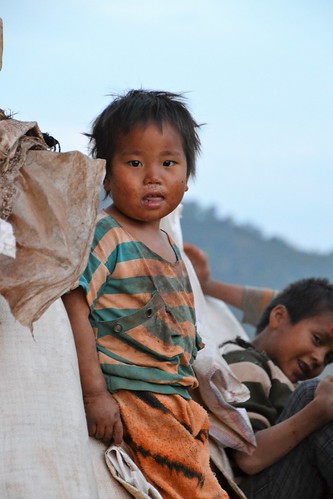 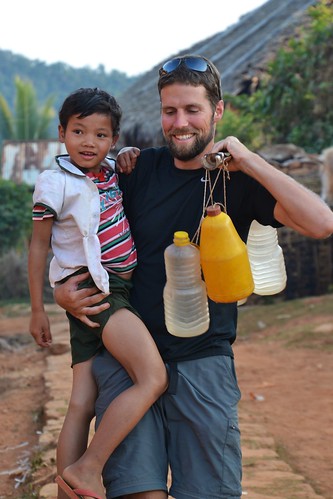 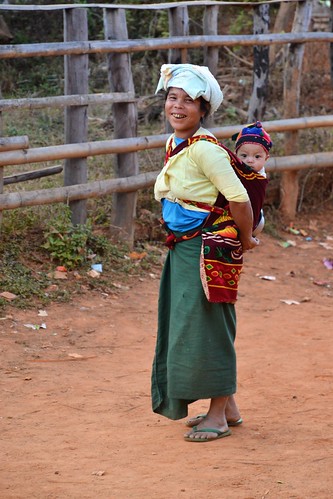 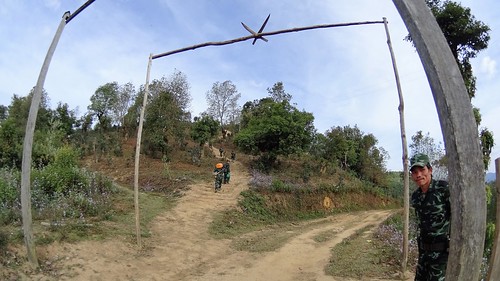 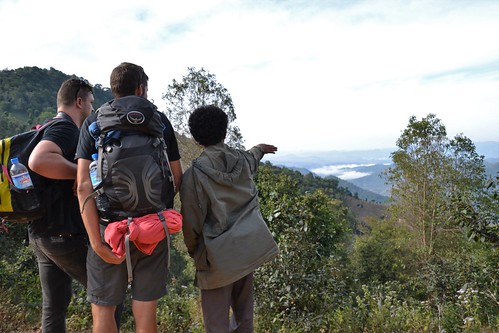 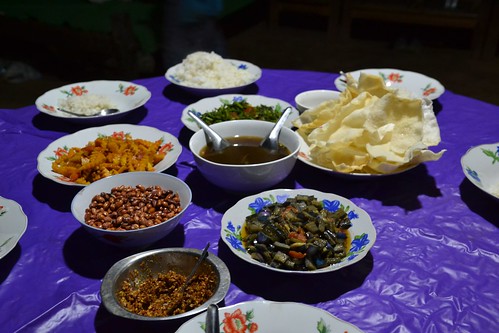 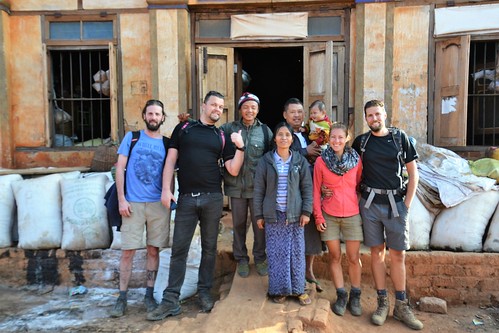 Back in Hsipaw, after one last dinner with Mathieu and Pieter, we said goodbye and the day after we got back to Yangon to end our Myanmar adventure. Not only this, but also our Asian adventure (if we don’t count the Bangkok & Kuala Lumpur airport layovers that we are currently having). In a few hours we fly straight to Sydney, where we stay a few days before we head to New Zealand.

ASIA, YOU WERE GREAT with all the memories that you have given us but now it’s time to say goodbye to rice & noodles, hectic unorganised traffic & public transport, spitting people, millions of temples, pagodas & stupas, … Unfortunately also goodbye to cheap accommodation and food 😉 …

Let our summer Down Under begin!