Ok we stole the title for our blogpost from Jon Krakauer’s book (It’s a story about the Mt Everest expeditions in the 1996 season which for many climbers & Sherpas had a disastrous ending due to a storm. Many of you probably saw the same story in the movie ‘Everest’ which is now playing in theatres.), but it described exactly how we felt when reaching the higher passes along our trip. The air became thinner and thinner, the higher we went.

For most of our readers a detailed itinerary is not so interesting, but we can tell you we had an amazing time in the mountains which we can show you with some pictures and some facts & figures. (For those who are interested, you can find a detailed day to day overview here).

Did you know?
In the regular high season (October-November), Lukla welcomes everyday 300 to 400 trekkers. At the time we started our trekking, this was about 60 to 80/day. This number was however increasing each day, but still not at the pre-earthquake level.

Signals that your personal hygiene standards are going down:

Our favourite quotations during the trekking:

Things we will not miss:

Did you know?
The more eco-friendly lodges heat up the dining room with a stove, in which they burn yak dong, which they dried in the sun. It takes about 4 days to dry the poo before it can be used as fuel. However, in the first lodges where we were the only guests, the stove was not lit at all 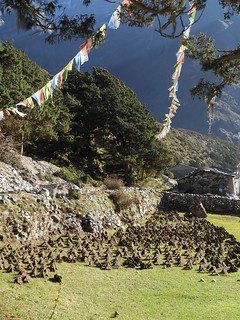 Did we got help?

Would we do it again?

DEFINITELY!!
And we would recommend it to everyone, therefore here our detailed itinerary. Do not hesitate to contact us on bcworldtrip@gmail.com, if you have any questions or need tips. 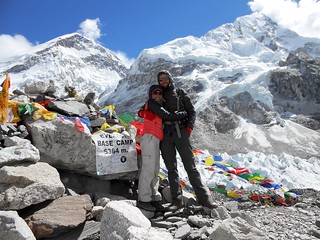 One thought on “Everest Three Passes Trek: Into Thin Air”