Our last hours in Auckland = duty calls! Time to try to fit everything we own and have collected in the trunk of our rental car back into our backpacks. And as we gathered some supplies to try to save a bit of money on the expensive island of Moorea this was quite a challenge

Our other ‘task’ is keeping you guys updated of course with this new blog post. 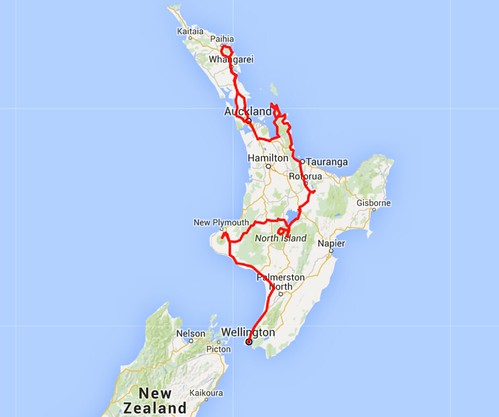 As you may have seen in our video, the South Island has been amazing so it was hard to beat this experience. The North island is more “crowded”, or let’s say populated, however this is still an overstatement. With a population density of 17 people per square KM it’s hard to be overpopulated. But we did indeed pass significantly more villages and houses than in the South.

There are less tall mountains but what is cool is that you see a lot of volcanic landscapes.
We wanted to climb the ‘picture perfect’ volcano Mt Taranaki but the weather gods had something else in mind: A tropical storm. We waited for 2 days but there were wind speeds of over 130km/h at the summit so it was not advisable to hike there (knowing that as from 60km/h you cannot even stand up properly during the steep ascent). Ergo: no Taranaki for us … 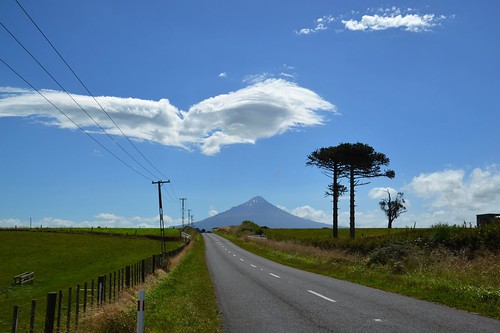 So we took a second chance of climbing a volcano; moreover it is New Zealand’s most famous one, Mt Ngauruhoe aka ‘Mt Doom’ from Lord of the Rings. This one is situated on the Tongariro crossing, which is said to be the best day hike in the world. As not only we wanted to check this out for ourselves, but about every tourist in NZ, we got up very early and were surprised that half of the camping was already empty at 5.30 in the morning. We were not going to be alone on the track, that was for sure…

We managed however to be early at the foot of Mt Doom and reached the top after a 1,5h steep, slippery & rocky climb with hard wind blowing in our faces which made it very hard at times to keep our balance (I was clearly struggling more than Benjamin, although he lost some weight he still seems to be bigger than me :-)).

Reaching the top felt so great, as we were above the clouds, still fighting against the wind (which made peeking into the crater and trying to catch a glimpse of “the ring” an on-the-edge-of-dangerous activity) and got even a private bagpipe concert from a dude that brought his instrument to the top. Although we suppose it was not his best performance ever, as the wind also loved to play the bagpipe.

Going down was again a challenge as the volcanic ground is full of loose small (& bigger) rocks and with so many people coming up at that time you often had to shout “FALLING ROCK!!” to the people lower than you. Benjamin tried to descent in a fast pace but this ended with scratches and bruises. Seems like New Zealand doesn’t leave us “untouched” 😉 . 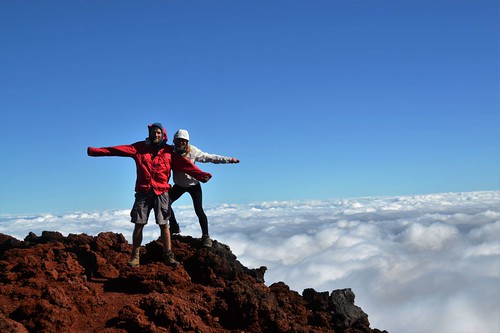 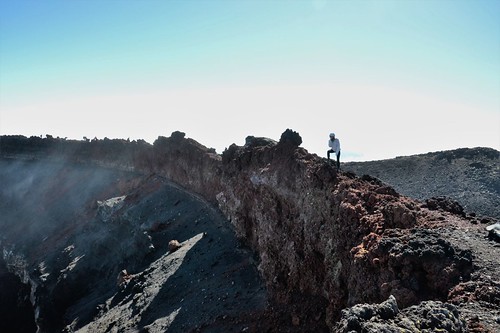 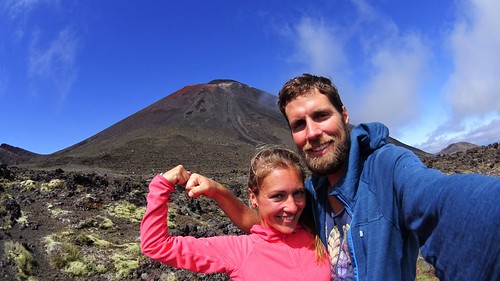 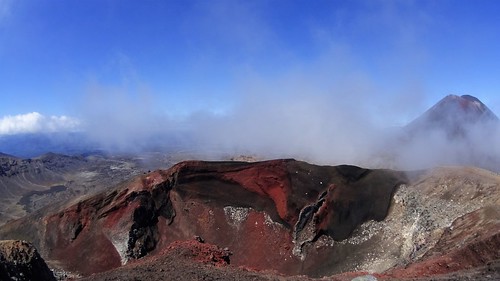 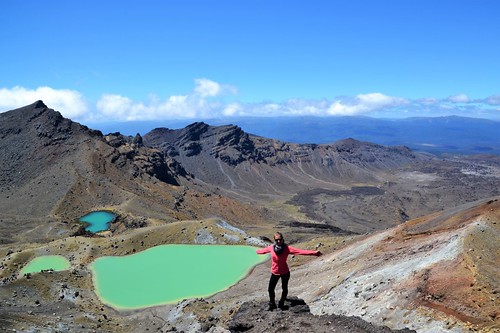 By the time we got back on the main track, we think that every single tourist was awake and on the track which made us feel a bit like we were one of New Zealand’s many sheep, being herded towards our shed. We must admit, it IS indeed a very beautiful day hike but the crowds were really crazy, so as always, this takes a bit the magic away.
We encountered more volcanic activity around Taupo where we found our own private little hot pool at the side of a gorgeous river. 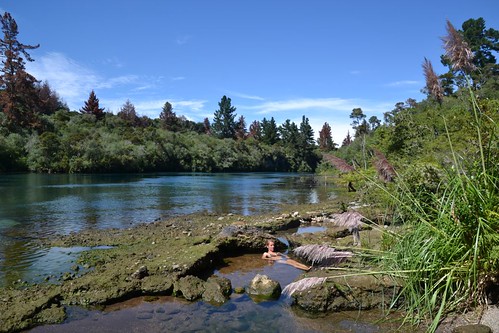 We also visited some mud pools & hot pools around Whangarei & Rotorua. We however decided not to spend a lot of time in Rotorua (thè city for volcanic nature parks & for mountainbiking) as the weather was not so good at that time and just hanging around with the smell of rotten eggs all over the place was not really on our bucket list. Let alone to have a lunch in this area. 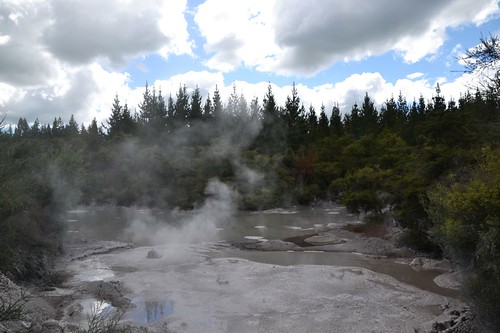 Finding peaceful camping spots & exploring more gorgeous beaches seemed more our thing, and this is something that the North Island sure has to offer! We are turning into pros concerning finding our own food, this time with fresh oysters (although Benjamin didn’t want to even try ;-)). We explored the beautiful Coromandel peninsula & Bay of Islands. 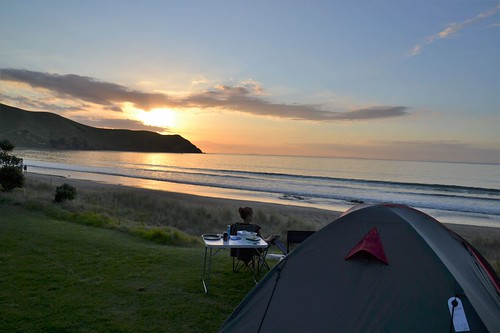 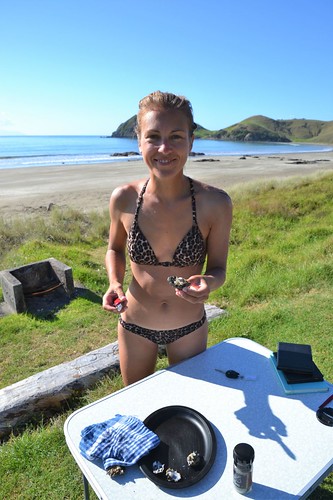 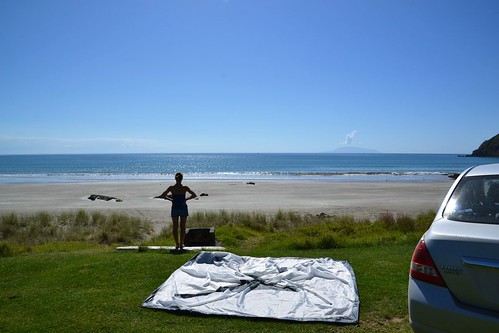 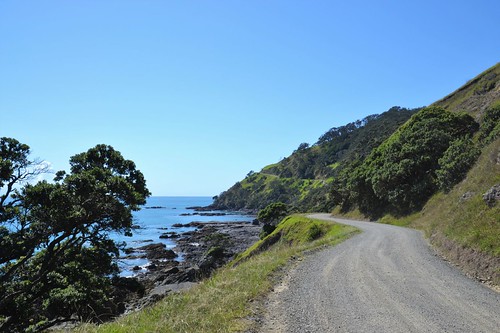 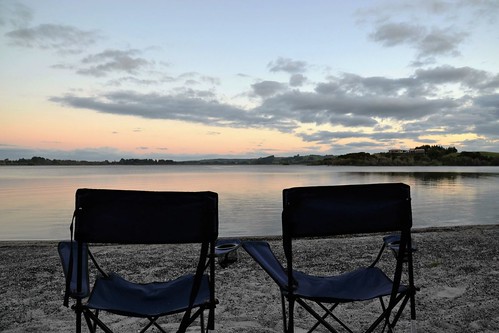 Unfortunately, the weather forecast for our last week predicted a lot of rain (a leftover from the Hurricane which destroyed a big part of Fiji), so we decided to stay a few days longer at Bay of Islands and not to go any further up to Cape Reinga (most northern point of New Zealand) and 90 mile beach. But we found a great camping spot at The Farm, where we had a nice shelter from the rain, a large kitchen, kayaks to use, … So we made the best of the rainy days by sipping wine on the porch, making pancakes, playing Cluedo with some Germans, kayaking, let the child in us go wild on the waterslide, and even enjoyed a day on a beautiful beach as the weather turned out better than predicted, hooray! 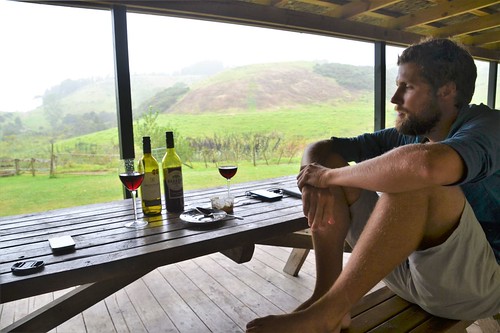 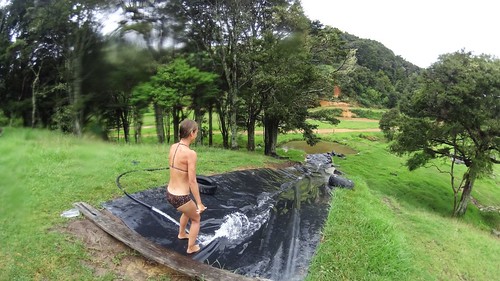 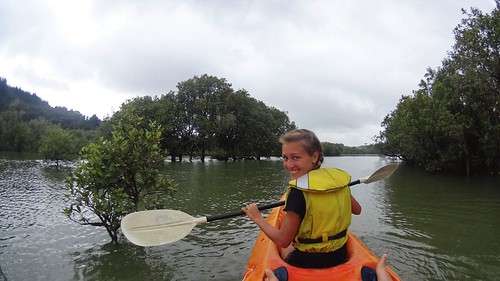 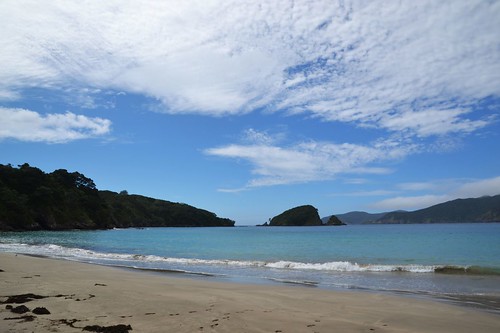 On our last days we explored Auckland, the biggest city of New Zealand. Auckland has a beautiful harbour (our favourite game: “Which sailboat would you choose if you could pick one?”) and nice restaurants & bars which we were happy to discover together with Tachnee, a girl from Belgium that is living in Auckland for some time and (together with her house mates) was so friendly to host us during our stay.

Did you know?
There live as many people in Auckland as in the entire South island: approx 1,5M (=1/3 of the total population). And of the total expected growth of New Zealand’s population, two-third is expected to be in Auckland. It’s getting crowded here! 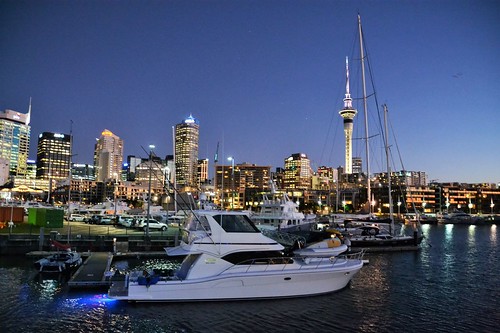 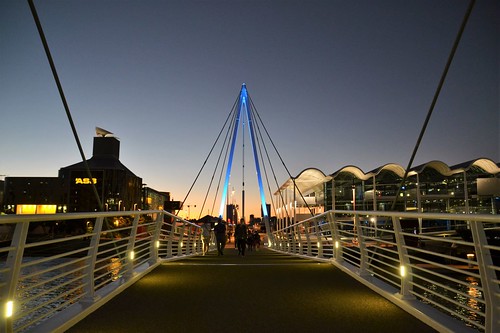 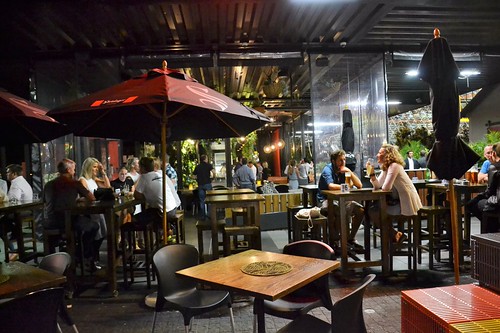 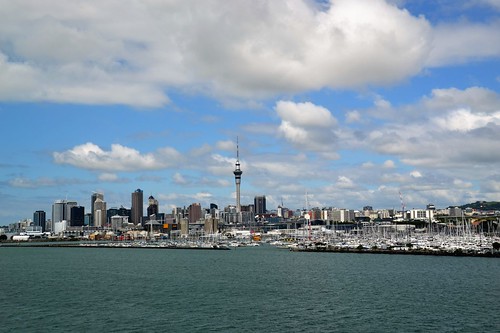 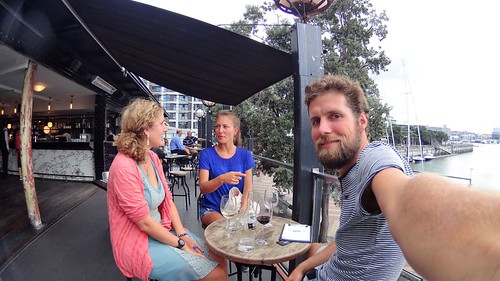 It was great to have a place where we could really feel at home, make homemade lasagne, … Even our tent got an upgrade here 😉 . Thanks to our lovely hosts: Kevin, Robin, Sam and Tachnee!! 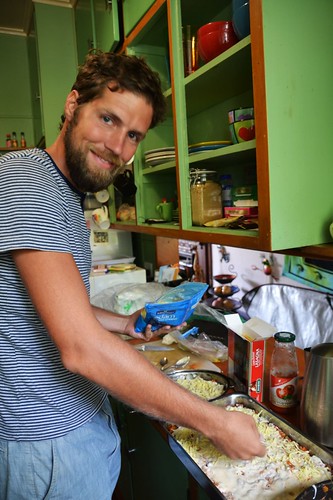 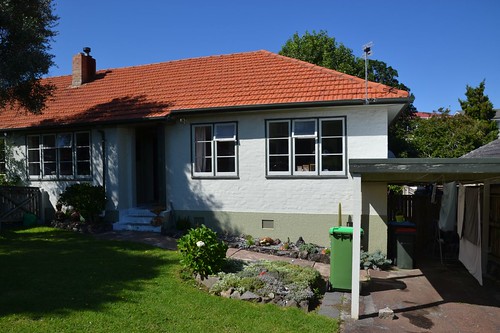 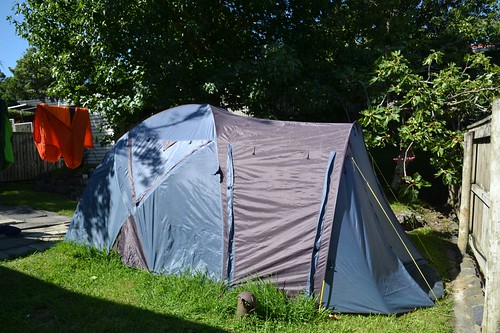 We also used the gift voucher that we got from our ex-colleagues at Profacts for a bungee jump from Auckland bridge. Benjamin already did this once before, so he was just excited to get his head dipped in the Ocean water under the bridge. I left the dip for what it was, as the jump itself already gave me goose bumps enough. Everybody in our group jumped like they do this every weekend, and I was scheduled the last, so I couldn’t stay behind, I couldn’t hesitate, I could only jump… BAM! There we went! Crazy feeling…
Thanks colleagues! (Now I can say thanks already, the moments before the jump it was more like “Grrrmmbrrrll f***ing colleagues” :-)) 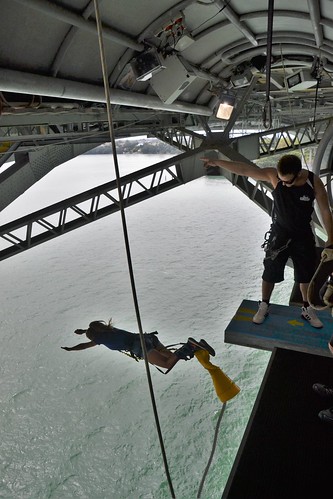 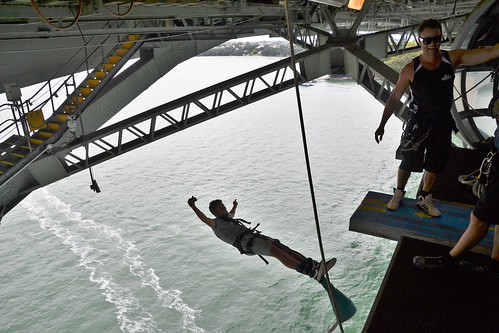 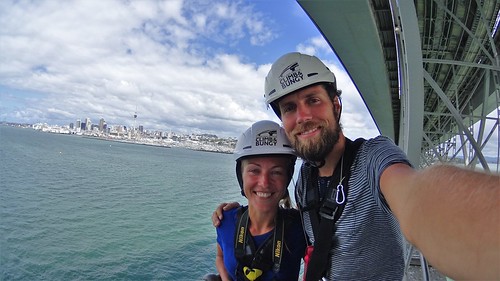 We said goodbye to Auckland, the North Island (and hence to New Zealand) in the same way like we said hello in Wellington: with a nice little dinner. And oh it was so yummie!! Orphans kitchen on Ponsenby Road, definitely a must go if you’re in Auckland once. This month’s menu was all vegetarian which fitted perfectly with our participation to the Belgian’s “Dagen zonder vlees” (=days without meat). We managed quite well here in New Zealand to eat as little meat as possible. We wonder how that will turn out in Chile & Argentina! 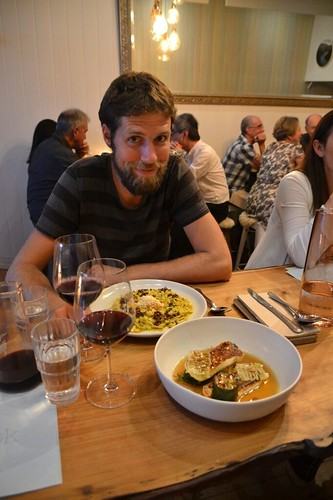 But first, off to Tahiti/Moorea! Unfortunately it is currenty rainy season on these tropical islands (the message of our AirBnB host “J’espère que la pluie s’arretera pour vous” does not predict much good), that is why we only spend 3 days over there (fingers crossed for good weather!).

After this we fly to Chile, and where better to start our Chilean adventures than on the isolated Easter Island that lies 3.500km away from the mainland. Looking forward to that!